On 28th October 2013, the Bishop of London, the Rt Revd and Rt Hon Richard Chartres, took part in the Report Stage debate of the Government’s Energy Bill. He tabled an amendment to the Bill, which sought to require the Secretary of State to publish a strategy setting out cost-effective policies to achieve a reduction
in demand for electricity, including specific targets for reductions to be made by 2020 and 2030. Following the debate on the Amendment, the Bishop did not move it to a vote. 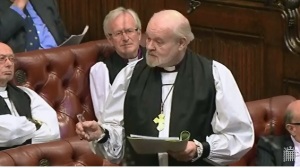 The Lord Bishop of London: My Lords, biblical studies teach me that when you have two amendments that look as much alike as my amendment and that of the noble Lord, Lord Grantchester, you must look for an Ur-text. Indeed, there is an Ur-text, as we all know, and the figures in my amendment are simply the latest figures available from the Government. This is intended to be a constructive and supportive amendment, which also reflects the concern mentioned by the noble Lord, Lord Roper, about the sole emphasis on the capacity market not really catching the full subject here.

According to the Secretary of State in his own foreword to the response to the consultation, which was published in May of this year, a 9% reduction in overall demand could save electricity equivalent to the output of four power stations in one year. I do not want to pose as an expert, of which there are many in this House, but I have been trying in my own diocese of London to improve energy efficiency. I have taken a keen personal interest in the various efforts and our churches have actually achieved a 22% saving in energy consumption between 2005 and 2011.

I represent the voice of the consumer—a rather small consumer. Nationally, through the environment campaign of the Church of England, which I chair, we have invested in a mixture of retrofit measures to address the heating and lighting of a stock of buildings that were not originally built with energy efficiency in mind. Renewable technology and behavioural change have helped an institution such as ours, which emits as much carbon as a large supermarket chain, to use energy more efficiently while maintaining open buildings at the heart of the local community countrywide. I am particularly proud of the fact that our new vicarage at St John’s, Wembley, was awarded the highest score ever under the code for sustainable homes at the 2012 awards.

We are not great experts on the general theme but we represent people who are seriously anxious to support the government policy and to operate in the most efficient way possible. We have learnt from colleagues in other European countries. In Sweden, which faces greater climatic challenges, the building code for new constructions has been strengthened; smart meters have been installed in almost all households—I understand that this is proposed for the UK but not yet implemented; public funding for research and innovation has been increased; and a new incentive programme has been launched.

Of course, these and other ideas were set out in the 2012 consultation, and the Green Deal is addressing the fact that in developed western countries the built environment uses half of all energy and generates half of all greenhouse gases, and there is very substantial wastage through walls, et cetera. But even the chief executive of the Green Deal Finance Company, Mark Bayley, has admitted that complexity is one reason why the take-up has been so disappointing. Many of those in fuel poverty, a substantial percentage of whom live in London, pay inflated prices through meters in their homes, and the current position whereby the more energy you use, the more likely it is that the tariff will be reduced, is surely unsustainable as well as unfair. This Bill, which I heartily support in the main, provides an opportunity to reflect on the wider costs of our energy habits and how to make the best use of our resources without penalising the poorest in our society. In the UK 6.5% of households say that they cannot keep their homes warm, as against 1.5% in Sweden. The figures for children living in fuel poverty, at 1.6 million, are especially alarming.

The amendment relies on the Government’s own latest estimates of the potential for demand reduction. It would seem obvious that a strategy setting out cost-effective policy options that go beyond what is currently being proposed by the Government should be published to show how these reductions can be achieved.

Baroness Verma: My Lords, I welcome the continuing interest shown in electricity-demand reduction. My noble friend Lord Roper’s Amendment 48 raises an issue that came up a number of times at both Second Reading and Committee—namely, that multiple pilots are necessary in order to test a variety of approaches. One of the pilot’s key aims is to test the Government’s preferred approach of delivering electricity demand reduction through the capacity market. That said, from a legal viewpoint the amendment is unnecessary as the Secretary of State is already able to design and run a pilot, or pilots, to test different approaches if this is necessary.

Before I move on, I, too, add my congratulations to the right reverend Prelate the Bishop of London on the great energy reductions he has achieved, which just shows that behaviour change towards energy usage can make a huge amount of difference. I commend what the right reverend Prelate has done. He also mentioned the very important Green Deal and smart meters. These measures will help to revolutionise the way we approach energy usage. It is about being able to ensure that consumers understand the usage of energy, which is why I listened very keenly to what the right reverend Prelate said. Where the Green Deal is concerned, 80,000 assessments have been carried out. Under ECO, many tens of thousands of homes have already benefited from the Green Deal. Like my noble friend Lord Teverson, I think the Green Deal is an excellent vehicle for being able to bring greater efficiency towards homes.

My noble friend Lord Roper and the noble Lord, Lord Grantchester, spoke about there being more than one pilot. We would rather start with what we consider the preferred option but we do not rule out there being multiple approaches simultaneously. If we have too many, it will be difficult to evaluate. We want to be sensible and see a range, if that is what is needed, but we have a preferred approach. It would be better for us as a Government to see that preferred approach dealt with first. There is nothing in the Bill to stop us having more than one approach.

I reiterate that Clause 37 is simply a spending power, required to authorise the spending of Government money. I appreciate the concern to ensure sufficient funds are available for piloting. We considered raising funds for the pilot using the capacity market powers but rejected this approach because it would delay the start of the pilot, which we announced is expected to start next summer.

Amendments 50 and 51, from the noble Lord, Lord Grantchester, and the right reverend Prelate the Bishop of London, would require the Secretary of State to publish a strategy to reduce a stated amount of electricity demand by 2020 and 2030. While I welcome the principle behind these proposals, the Government have already published a number of documents, including on how we will meet our existing energy efficiency commitments. That is through the energy efficiency strategy which will be updated later this year, the DECC energy and emissions projections, and the Government’s response to the EDR consultation. These documents already provide a comprehensive view of Government strategy. As the pilot is designed to improve our understanding of the cost-effectiveness of EDR in relation to that of a variety of supply-side and demand-side measures, we do not consider it appropriate to set a specific EDR target.

The noble Lord, Lord Grantchester, asked about the difference in the estimates that the department has given out. The estimate of the untapped potential was revised from 92 terawatt hours to around 32 terawatt hours by 2030 because there is considerable uncertainty as to the exact level of potential for electricity demand reduction. We believe that this figure represents a much more sensible picture of what can be achieved. That analysis has also been subject to external peer review.

In conclusion, we have listened to concerns about reporting the results of the pilot and have introduced an amendment on this. Our existing legal powers already allow us to test other approaches if it becomes necessary. We believe the minimum £20 million allocated to the pilot is sufficient to support a range of projects in different sectors in these difficult times. We already have an energy efficiency strategy, which will be updated shortly. I hope that my noble friend Lord Roper, the noble Lord, Lord Grantchester, and the right reverend Prelate the Bishop of London will agree to withdraw their amendments. I beg to move the amendment that stands in my name.