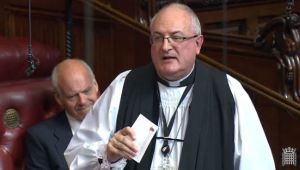 On 7th July 2016 Baroness Sharp of Guildford asked Her Majesty’s Government “what assessment they have made of the impact of the outcome of the referendum on the United Kingdom’s membership of the European Union on the short-term and long-term participation of UK universities in Horizon 2020 research collaborations and the Erasmus Programme”. The Bishop of Ely, Rt Revd Stephen Conway, asked a follow up question:

The Lord Bishop of Ely: My Lords, I declare an interest as a visitor to a number of colleges in Cambridge. In my conversations with the vice-chancellors of both Cambridge University and Anglia Ruskin University, which is in Cambridge, not only were they very concerned that there was a risk of losing £500 million of research funding for Cambridge and for the Russell group universities but—rather than the money—they were much more concerned about soft diplomacy and the free movement of scholars, which may be affected in the future. The vice-chancellor of Anglia Ruskin tells me that it is doing some very important research with a university in Portugal on earthquake studies—perhaps, by analogy, useful to us at the moment—and that this research could be in jeopardy. Can the Minister give us some assurance that there will be attention both to the soft power and soft diplomacy that needs to be assured and to how such research, with its real importance to vulnerable communities, will be sustained into the future?

Baroness Evans of Bowes Park: Of course the Government and I entirely understand the concerns of the sector. We have a world-class higher education sector and we want to support it and make sure that it is able to maintain its footing as the best in the world. That is why we will work extremely closely with the sector throughout the coming months and years to make sure that we provide the support, their voice is heard, and we do all we can to maintain it.