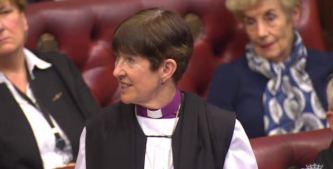 On 30th November 2016 Baroness Lister of Burtersett asked Her Majesty’s Government: “whether, in the light of the public debate around the film “I, Daniel Blake”, they plan to set up a review of the treatment of claimants in the social security system.” The Bishop of Newcastle, Rt Revd Christine Hardman, asked a follow up question:

The Lord Bishop of Newcastle: My Lords, given that the National Audit Office has today said that there is limited evidence that benefit sanctions work but rather that they result in “hardship, hunger and depression”, can the Minister update the House as to whether Her Majesty’s Government will now commit to a substantial review of the use and implementation of sanctions?”

Lord Freud: I congratulate the right reverend Prelate the Bishop of Newcastle on her first question. I hope they will not all be as painful in future as this one. I cannot make that commitment. As is said in the report, the reality is that sanctions work. There is a lot of external evidence of sanctions having a substantial impact on employment uptake, whether you are looking at the evidence from Switzerland, the Netherlands, Denmark or Germany. Our own survey shows that people on both JSA and ESA are more likely to accept the rules of the system with the sanction system behind it.