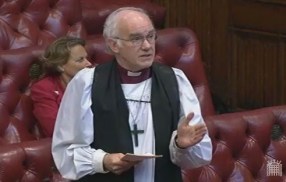 On 1st December 2016, Baroness Howe of Idicote led a short debate in the Lords to ask the Government “what steps they are taking in order to achieve compliance with the new European Union net-neutrality Connected Continent requirements in such a way that United Kingdom adult content filtering regimes can be maintained in order to help keep children safe online.” The Rt Revd Dr Peter Forster, Bishop of Chester, took part in the debate.

The Lord Bishop of Chester: My Lords, the House should be deeply grateful indeed to the noble Baroness, Lady Howe, for her persistence in bringing before us the difficult issue of online safety, particularly as it affects our children. I must say, the thickness of the plot as she set it out in her opening speech would be a credit to Agatha Christie herself in this particular aspect of it. We will be returning to the broader aspects when the Digital Economy Bill comes before us shortly. I believe that there is also a forthcoming report by the Communications Select Committee on children and the internet.

Today’s question concerns how, in the UK, we can comply with the EU net neutrality requirements while maintaining our commitment to keeping adult content-filtering arrangements in the internet provision in this country. I am pleased that the Government will indeed be bringing forward an amendment to ensure that any legal uncertainty is set aside.

I associate myself completely with the remarks made by the noble Baroness, Lady Healy, and the noble Lord, Lord Hay, in their speeches. I am also pleased that in the other place the Government accepted amendments promoted by Claire Perry MP and Fiona Bruce MP—one of the Cheshire MPs—to strengthen the child protection aspects of the Digital Economy Bill, which we will be considering very shortly.

The sheer growth of the internet is a source of continued amazement. I understand that 99% of UK households with children now have an internet connection, and that most children now spend more time online than watching television. Given the influence and impact of the internet, we must remain vigilant so that we can access its benefits but avoid its temptations and downside.

The term “net neutrality” sounds easy on the tongue but it is quite clear that the internet is not neutral in its effects. It can bring many blessings but also many corresponding dangers. The two inevitably go together. Advances in meaning, technology and potential of all sorts seem to generate a corresponding downside or shadow side. If you think about it, that is the way the universe seems to be constructed. There was no death in the universe until life itself had evolved. You have to get to the complexity of animals to have “nature red in tooth and claw”. You have to get to the sophistication of human beings able to think about truth, beauty and justice to produce Adolf Hitler, or moral evil in all its forms. It seems to me that the more developed a society becomes, the more we have to be alert to the fact that there are corresponding dangers.

We are all easily seduced by the old myth that there can be pure progress without a downside. I go back 30—perhaps 40—years to a journalist I remember on the radio, Patrick Hutber, who used to talk regularly about business matters. His maxim was always: progress means deterioration—that is, whatever progress is announced, we should look for the accompanying downside. That is so true as regards the growth of the internet. I gladly and warmly acknowledge all its potential blessings but there is always a downside—in this case in relation to privacy, as we discussed during the passage of the Investigatory Powers Bill, and in exposing our children to things over which we have no control without the sort of filtering arrangements that are the subject of this Question.

The noble Lord, Lord Hay, said that the present voluntary arrangements cover nearly 90% of the market. However, there is a further 10% or 12% of smaller internet service providers that are not subject to those arrangements. I understand that many of them adhere to those arrangements in one form or another, but then you have the problem of a lack of consistency, to which the noble Baroness, Lady Healy, referred. It would be good if the Minister could bring us up to date with where the smaller ISPs are as regards endorsing the voluntary arrangements which the big four have taken on board.

All this underlines the need for a proper statutory approach that covers all service providers, large and small, because of the important need to provide the underlying child protection aspect of what we are doing. I hope that the promised government amendment can be framed in these terms. I look forward to hearing more on that from the Minister when she responds to the debate.