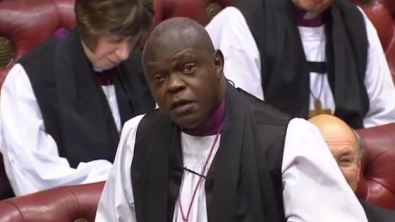 On Monday 13th March, the House of Lords considered the EU (Notification of Withdrawal) Bill, which had been returned to it by the House of Commons during a parliamentary process known as ‘ping pong’. MPs had rejected an amendment passed by the Lords  to make protection of EU/EAA nationals a priority in the Brexit negotiation process.  The Liberal Democrats tabled a further amendment to disagree with the Commons in its decision. The Archbishop of York, the Rt Hon and Most Rev Dr John Sentamu, spoke in favour of agreeing with the Commons (so opposing the amendment, which was later defeated during a vote).

The Archbishop of York: My Lords, I have been listening to what people have said and do not want to repeat anything. However, some of us objected to the amendments not because we lacked sympathy, understanding or compassion. We did it simply because we thought there was a confusion of process with substance. The second reason some of us objected, in particular myself, is point 6.2 of the government paper, which says:

“While we are a member of the EU, the rights of EU nationals living in the UK and UK nationals living in the EU remain unchanged. As provided for in both the EU Free Movement Directive (Article 16 of 2004/38/EC) and in UK law, those who have lived continuously and lawfully in a country for at least five years automatically have a permanent right to reside”.

If Brexit happens, and I am sure that it will, EU law will be incorporated into British law. It would be quite tough for the Government to then argue that those who have lived here for more than five years do not have a right to reside, and your Lordships’ House and the other place would have to argue the case again.

I approach this issue with deep compassion. I came here while running away from Amin’s torture. For almost 15 years, I was living and travelling on a UK travel document. As a student, I was prevented from working. I know the difficulties. But when I sit in your Lordships’ House and hear Members say that the other side is not the only one that thinks it is right, I think that we should all find a language that talks about people as people. They are being used as a bargaining chip, which is very hurtful to me and others. That cannot be right because it casts aspersions on those who argue the other way.

The time has come for us to decide. If we want a quick resolution for the EU citizens who live in this country, I will find it difficult to continue further delaying the triggering of the article. It should be done as quickly as possible.