On 12th July 2018 the House of Lords debated a motion from Baroness Stroud, “That this House takes note of the steps being taken by Her Majesty’s Government to engage with small charities and faith-based organisations in delivering United Kingdom aid overseas.” The Bishop of Rochester, Rt Revd James Langstaff, spoke in the debate: 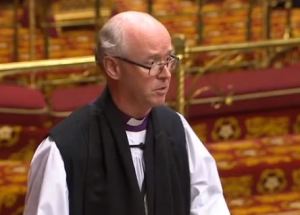 The Lord Bishop of Rochester: My Lords, I had not intended to speak in this debate, because I did not think I would be able to be here, but I am prompted to do so in response to the mention of Tearfund by the ​noble Baroness. I am grateful to the noble Baroness for bringing forward this important debate on a significant part of our contribution to development in other parts of the world.

I will take you briefly to a visit I made two years ago to the ward of Matongoro, which is in the Kongwa district just east of Dodoma in Tanzania. In that village, which has been dependent on government assistance and international aid for quite some time, I encountered a significant transformation. Through the simple expedients of working with the villagers through the local church there to build the capacity of that community and identify that which they could offer, a particular piece of work has been done initially around agriculture, based on irrigation and farming techniques of appropriate technologies. I was taken to an area where a previously barren piece of land was replete with vegetables of all different kinds, which were being grown by the local villagers for the benefit of that community but, more importantly, in excess of their own needs. That product was then sold in the markets and the income was kept within that community.

This is an example of a partnership with Tearfund, which was mentioned by the noble Baroness, and a parish in my diocese—St Stephen’s, Tonbridge—and the local Anglican church in that community, so it was a three-way partnership facilitated by a faith-based organisation, Tearfund. It was remarkable that this village, which had been waiting for government funding to renew its dilapidated school, had invested the proceeds of their horticulture and selling of crops into rebuilding their own school, and so was not waiting for external funding. I was privileged to formally open their new school buildings in that village.

I use this as an illustration of the way in which, as has already been referred to, organisations that are close to the ground, which can respond immediately to local need in creative and often very simple ways, can bring about real transformation that affects the well-being of countless people, not least succeeding generations. Here we have an example of a school being rebuilt for the benefit of that community, of people finding gainful employment by being able to grow their own food and sell it for the benefit of that community, and of the economic cycle remaining within that community and thereby bringing benefits to all concerned.

I am grateful for this debate and I commend support, in whatever way, for these small-scale initiatives to Her Majesty’s Government and to all of us who have the opportunity to support and encourage them.

The Minister of State, Department for International Development (Lord Bates) (Con)….The right reverend Prelate the Bishop of Rochester gave a practical example of a partnership between his diocese, Tearfund and the local community in Tanzania. I particularly enjoyed that example because sometimes aid is perceived by people in need as having a patronising element to it. Therefore, helping people to deploy the ​skills they already have in providing for their own future and building their own schools is very much where we are heading.