On Tuesday 9th October 2018 the House of Lords debated the Government’s Counter-Terrorism and Border Security Bill. The Bishop of Newcastle, Rt Revd Christine Hardman, spoke in the debate to seek assurances on freedom of thought and expression: 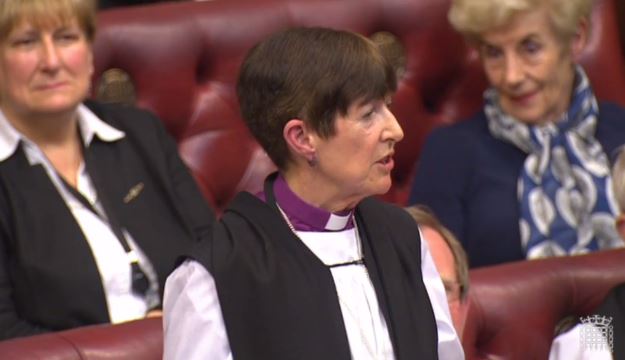 The Lord Bishop of Newcastle: My Lords, first I too want to say how much I am looking forward to the maiden speeches of the noble and learned Lord, Lord Garnier, and the noble Lord, Lord Tyrie. The noble ​Lord, Lord Tyrie, will be well acquainted with these Benches, having worked closely with my most reverend brother the Archbishop of Canterbury on the Parliamentary Commission on Banking Standards, which the noble Lord so ably chaired.

In opening this debate, the Minister spoke powerfully and movingly about the terrible consequences of terror, the effect on people’s lives, the suffering that is lifelong for people. It is in this context that I broadly welcome the Bill. I certainly recognise the difficulty of drafting and steering this kind of legislation. It is to walk something of a tightrope, as described by the noble Lord, Lord Marks. The current national security situation is complex, as is seen so sharply in our news headlines this morning. At Second Reading, I would like us to stay alert to that tightrope we walk, to proportionality and, perhaps especially, to the danger of unintended consequences.

For example, I echo the concern of the noble Lord, Lord Marks, that in implementing Clause 1 we may end up criminalising the mere expression of a thought or a belief, as opposed to action. Freedom of thought and expression is a treasured value in this country. As a Bishop in the Church of England, it is perhaps not surprising that I hold dear Elizabeth I’s assurance in relation to religious freedom that,

“I would not open windows into men’s souls”.

We need to keep a watchful eye so as not to imperil something that is so precious to us.

On Clause 3, as well as the questions raised by the noble Lord, Lord Rosser, I ask a genuine question: are these powers responsive enough to keep pace with technology and communication channels, or are we giving powers to the Secretary of State and judges that are designed to fight the last, rather than the current, battle?

Just last week, I met with Tyne & Wear Citizens. We met in Newcastle Central Mosque and what we heard was distressing. We heard from some women in the mosque that, over the last period, there has been a sharp rise in the instances of women wearing hijabs being abused on public transport in Newcastle and the surrounding area. They are having to gather up a lot of courage to travel on the Metro. This abuse is unacceptable in our society. Our desire to keep our borders secure should never jeopardise the safety of any of our citizens as they go about their day-to-day lives. In all the complexities of the Bill—and I do not underestimate the complexity of the issues—it is important that we carefully nuance our discussions to avoid any religious or ethnic group being associated with those who wish to do our country and its citizens harm.​

My prayers continue to be for those who draft our legislation and those who will administer justice in the light of it for years to come. I also pray for those who keep this nation secure. It is my hope that we will continue to build a country which will allow all our citizens to feel safe and in which kindness, respect and courtesy abound.

Lord King of Bridgwater (Con) [extract]..My Lords, it is a great privilege to follow the right reverend Prelate. In her relatively brief remarks I think she impressed the whole House with the quality of her contribution. I wonder whether any of her predecessors as Bishop of Newcastle would have dreamed of standing up in your Lordships’ House and saying, “I have just had a meeting in Newcastle Central Mosque”. That drew attention to the challenges and differences that we now face in our country and in the world. I am grateful to her for carrying on what has been an extremely impressive start to this important debate…

Baroness Jones of Moulsecoomb (GP) [extract]…I am very concerned about Clause 1. I was delighted to hear the noble Lord, Lord Marks, the right revered Prelate the Bishop of Newcastle, and the noble Baroness, Lady Hamwee, talking about our rights and freedoms and the fact that we must not compromise them when we try to legislate against people who wish to take them away. This Bill will make it a crime to express an opinion or belief that is supportive of a proscribed organisation. When the noble Lord, Lord King, spoke about ISIS knowing more about WhatsApp, or whatever, than he does, I thought to myself that that sort of ​comment could actually fall within the parameters of this legislation—you do not have to intend to support a particular organisation, or intend to support terrorism, you have only to be reckless…

Lord Thomas of Gresford (LD) [extract]…Simply expressing your opinion is not enough, as the right reverend Prelate the Bishop of Newcastle’s apt quotation from Elizabeth I pointed out earlier. A person at Hyde Park Corner can say, “I believe in Scottish independence, and I think the best way to achieve this is through Scottish Dawn”, which is a proscribed organisation; perhaps that could also be said by someone from a wee free pulpit. That person would not be committing an offence under the proposed clause; he is merely opening the window into his soul, as Elizabeth I put it. If what he says is an invitation to join Scottish Dawn, he would commit an existing offence under Section 12(1) of the present Act. If his purpose in so speaking is to encourage listeners to join Scottish Dawn, it is already covered by Section 12(3) of the existing law.

Baroness Warsi (Con) [extract]…Sadly, I have some concerns about the drafting of the Bill, both in the mischief it seeks to remedy, as outlined by the noble Lord, Lord Marks of Henley-on-Thames, and the way in which it seeks to do so. We must not become a country that polices thought, as was explored by the right reverend Prelate the Bishop of Newcastle. As Liberty succinctly put it, the Bill,

“pushes the law even further away from actual terrorism, well into the realm of pure speech and opinion”.

We must not cite exceptional circumstances to justify a blanket law change.

Baroness Barran (Con) [extract]…Finally, the word that was used most frequently in relation to Prevent, as mentioned by the right reverend Prelate the Bishop of Newcastle, was a call for “compassion” in its implementation. There is currently a stark gap in the Prevent and Channel guidance. Nowhere does it mention the need to acknowledge the stigma and fear that will inevitably accompany being identified as needing support in relation to extremist or terrorist activity; nor does it guide agencies on how to respond to those fears in an empathetic and kinder way.

Lord Paddick (LD) [extract]…I echo the concerns of the noble Baroness, Lady Warsi, and the right reverend Prelate the Bishop of Newcastle. If I understand him my noble friend Lord Thomas of Gresford correctly, with “reckless”, either it is an objective definition of reckless in which case we are into the realms of people being arrested for what they think or simply for expressing their view, or we are looking at a subjective definition of reckless, which is what the current law says. In that case, the provision is superfluous to what is already in existing legislation. Clearly, we need to consider these issues carefully.

Lord Kennedy of Southwark (Lab Co-op) [extract]: My Lords, the first duty of a Government is to keep their citizens safe and have legislation on the statute book that gives powers to the appropriate authorities to keep people safe. I will always support the work of the Government in this regard. That is not to say that I will not question and probe them and seek to amend legislation when we believe that they are not striking the right balance. That is the point of our being here: to make legislation better and more effective; to fully understand the Government’s intentions; and to avoid as far as possible the problems caused by unintended consequences —a point made earlier by the right reverend Prelate the Bishop of Newcastle.

The Minister of State, Home Office (Baroness Williams of Trafford) (Con) [extract]…Regarding Clause 1, “Expressions of support for a proscribed organisation”, and the concept that these provisions might be an attack on the freedom of speech, noble Lords are absolutely right to raise that issue. The noble Lords, Lord Marks, Lord Thomas and Lord Ahmed, and the noble Baroness, Lady Jones, expressed concern that the extension of the offence of inviting support for a proscribed organisation would undermine that freedom of speech. The right reverend Prelate the Bishop of Newcastle also spoke about this issue. It is of course right that we uphold the right to freedom of expression, something which we value so highly in this country and is part of our core values. People are free to express any view they wish, even ones which the wider public might find distasteful, as long as they do so within the law and do not harm others. However, we are clear that any groups or individuals that cause harm to our society and promote hatred and division will not be tolerated. This measure is aimed at those who are reckless—“reckless” being quite a well-established word in law—as to whether statements that they make will encourage others to support a proscribed terrorist organisation. That type of activity is very serious. It can have a strong influence on individuals who are vulnerable to radicalisation, as some noble Lords pointed out, and can create a real risk of harm to the public. As such, it is vital that we are able to target those who seek to exploit others and lure them into terrorism, so that they can no longer skirt the fringes of legality—something that noble Lords have talked about extensively today.