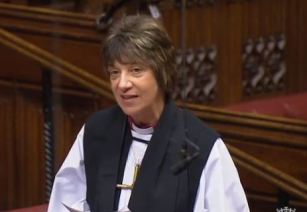 On the 30th October 2018 the Rt Revd Rachel Treweek, Bishop of Gloucester asked a question she had tabled, on Government action to increase support given to children with a parent in prison. The exchange, including the follow-up questions of other Members, is reproduced below:

The Lord Bishop of Gloucester: To ask Her Majesty’s Government what action they are taking to support the children of prisoners.

Baroness Vere of Norbiton (Con): My Lords, having a parent in custody can have a very significant impact on a child. We must understand the diverse needs of these vulnerable children and provide the necessary support. For example, recent government reforms mean that prison governors now have the budget and the flexibility to commission family services that work for their prisons and in their communities.

The Lord Bishop of Gloucester: In 95% of cases where a mother receives a custodial sentence, a child has to move home. Unlike a child in care who moves home, the child of someone in custody has no guarantee of a place at the local school, and the person looking after that child receives no financial support. Will the Minister commit to identifying children of those in custody as a specific group, and ensuring that they and their carers receive the necessary support?

Baroness Vere of Norbiton: I thank the right reverend Prelate for raising this. I managed to speak to her, literally a few minutes before I rose to answer the Question, and I was surprised, as I am sure noble Lords will also be, that that is the case. My information is that families who look after such children, whether they are carers from the same family or non-family carers, are eligible for the same benefits as they would get if they were the parents of the child—child benefit, child tax credits and so on. Indeed, they may also get other funding under Section 17 of the Children Act. I would like to investigate this further and write to the right reverend Prelate. I will, of course, put a copy in the Library, because this is a very important issue.

Baroness Bloomfield of Hinton Waldrist (Con): My Lords, almost exactly a year ago we debated the excellent Farmer review on this very subject. Can the Minister report on the progress, if any, on developing links between prisons and communities, which benefit the children of all prisoners, and on technology such as tele-visiting arrangements, for maintaining prisoner-child contact?

Baroness Vere of Norbiton: I share the noble Baroness’s appreciation for the work of my noble friend Lord Farmer, and we are making good progress in going through his 19 recommendations and ensuring that they are implemented. One of those recommendations was the introduction of new family service contracts for prison ​governors, which, as I mentioned, has already happened. We are trying to create outward-looking prisons so that our empowered governors go into the community and look at what is available there, whether that be third sector groups or other service provision, and use what is available locally to ensure that prisoners have contact with their families, and also the employment skills and training they need to make a successful future.

Baroness Corston (Lab): My Lords, I hope the Minister will visit some women’s prisons. A short time ago the Justice Secretary, David Gauke, announced that there would be a presumption against sentences of less than 12 months. The overwhelming majority of women in our prisons are there for far less than 12 months; indeed, two years ago 271 of them served sentences of two weeks. This break between mother and child is catastrophic, and frequently there is no family reunion. What progress is being made to ensure that we do not have these short sentences?

Baroness Vere of Norbiton: The noble Baroness is completely right, in that short sentences for men or women are a significant factor in family breakdown. The Lord Chancellor has made it very clear that he wants to see the number of short-term sentences decline. That of course depends on the independent judiciary and the sentences that they hand out, but there is lots that the Government can do. We are ensuring that the National Probation Service pre-sentencing report includes information on dependants. If that information is in the pre-sentencing report, the judge sees it and can then use it as a mitigating factor in the sentence that gets handed down. Furthermore, we are rolling out an excellent piece of work by Dr Shona Minson, Safeguarding Children when Sentencing Mothers. That is important work and we need to get that message out there, but at the end of the day it will be up to our independent judiciary to hand down sentences.

Baroness Burt of Solihull (LD): My Lords, it is estimated that over 200,000 children are affected by parental imprisonment across the UK. We do not know the actual number because neither the courts nor local services routinely ask them. These children are left in the shadows, their needs often forgotten, with devastating impacts. Despite their situation, they are locked out of the support that they need to get a better chance in life. Will the Minister heed Barnardo’s call for the Government to appoint a lead Minister to oblige the courts to ask about the children of people being sent to prison and ensure that adequate childcare and support arrangements are in place?

Baroness Vere of Norbiton: My Lords, this is a very complicated area. The noble Baroness is not quite right: we do encourage courts to ask defendants, whether they are male or female, whether they have dependent children. What happens is that some mothers, in particular, fear that their child might then be taken into care, and they may well have made their own informal arrangements for that child and therefore think, “Actually, I’m not disclosing that I have children”. It is therefore very difficult for us to pick up that information.​

The noble Baroness mentioned Barnardo’s. I pay tribute to the work that it has done on the National Information Centre on Children of Offenders, a comprehensive website that was launched in May this year so that all government agencies, both nationally and locally, can find out best practice and work out the diverse needs of these very vulnerable children.

Lord Laming (CB): My Lords, does the Minister agree that one of the reasons why we have these very short sentences of two weeks and the like is that the courts appear to have lost confidence in the non-custodial arrangements that have been made, particularly given the decline in the standing of the probation service? What steps are being taken to recover the position of probation supervision?

Baroness Vere of Norbiton: The noble Lord is right that there has been a move away from community sentences, which perhaps has been because the quality has not been there. However, we are turning that around. We are looking at improving the provision of mental health, alcohol and drugs treatment locally, so that court-ordered treatment can run alongside community sentences. On the point about probation, we have re-established the National Sentencer Probation Forum, in which people who hand out sentences and the probation service can discuss what issues need to be sorted out to ensure that the provisions are there for these community-based sentences. I think all noble Lords will agree with me that the more that we can use them, the better for all involved.

Baroness Massey of Darwen (Lab): My Lords, are the Government supporting parenthood programmes for prisoners? I believe that some are very effective. Can the Minister say whether there is support for them, and whether will they expand?

Baroness Vere of Norbiton: I would be very happy to talk further on that matter. For example, in women’s prisons the family services contract has gone out to a single contractor called Pact, and there are lots of opportunities for families to learn together, along with homework clubs. The noble Baroness mentioned parenting. There are parenting skills classes, which often involve constructive whole-day family days through which the families of mothers in prison can get together and learn together. These appear to be working very well.