On 2nd April 2019 the House of Lords debated a Government motion “That this House takes note of the seventieth anniversary of the founding of NATO and its continuing role in the United Kingdom’s defence and security.” The Bishop of Portsmouth, Rt Revd Christopher Foster, spoke in the debate: 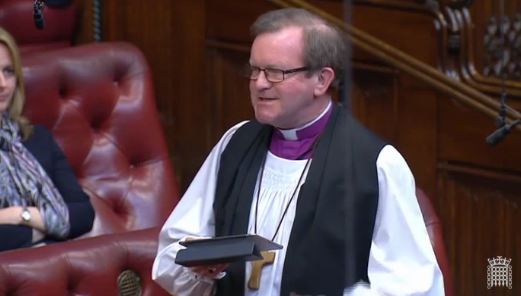 The Lord Bishop of Portsmouth: My Lords, it is as ever a pleasure to speak in your Lordships’ House, but today perhaps I feel the privilege especially. I cannot report that, 70 years ago, a Bishop contributed to this House’s debate on the founding of NATO. Without the personal, military, diplomatic or political experience to which the Minister alluded, I am grateful for the forbearance of your Lordships in listening to my contribution today.

I am sometimes all too aware that bishops—and indeed many members of the clergy—like to hold that their pronouncements are of a prophetic character. At its best, that means telling hard truths to those in power. The importance of holding to account, and of setting out the likely consequences of a course of action, will be familiar to all who value the work of this place. However, I admit that this also means that the voice crying in the wilderness can sound like the voice of one who neither knows nor appreciates the challenges and hard choices that power presents.​

It is a particular pleasure, therefore, to congratulate the noble Earl on bringing this Motion before the House. This truly is an anniversary to celebrate. It is an occasion to honour all our NATO partners—from the dozen of 70 years’ standing, to Montenegro, the most recent addition—and to honour our own nation’s significant, indeed defining, contribution in establishing the alliance, and our continuing commitment to it.

The diocese I serve has its own particular close connection to the Armed Forces, and through them to the alliance itself. Less than a fortnight ago, we saw one example of that commitment as we said a temporary goodbye to one of our own: HMS “Westminster”, one of the Type 23 frigates based in Portsmouth, departed for NATO duties in the Baltic. It was a reminder of our commitment, in the form of people and often very expensive kit; a gigantic aircraft carrier conducting asymmetric warfare, or the ability to combat ever more insidious, subtle and damaging cyberattacks. We can be proud that our commitment is translated into cash and that we can count ourselves one of the NATO members to contribute the requisite proportion of our GDP to defence.

Equally, however, I am seized of the importance of that contribution manifesting itself in the capability required to face down, deter and tackle any potential adversary or threat. I confess that, though I accept that the letter of our expenditure commitment is honoured, I remain to be wholly convinced that we obey the spirit quite so properly.

We must not forget that NATO is not just a defensive military enterprise: it is nothing less than a community of values. That was a point made abundantly clear when the treaty was signed in 1949, not least by Dean Acheson, the American Secretary of State. He said that yes, the alliance was to deter bullies—those who used, as he put it, “power to dominate others”—but in it also lay,

“the affirmation of moral and spiritual values which govern the kind of life they propose to lead”.

It was and is democracy’s shield and guarantor.

I am of course not blind to the nature of organisations. NATO’s foundations will have been the fruit of all kinds of motives: often complex, sometimes contradictory, and even ignoble. None the less, those do not detract from its purpose. Moral and spiritual values were at the heart of NATO’s foundation; they must also be at its heart now. But perhaps those values represent something more. Perhaps they represent our recognition that we are best served when we act closely in concert with our friends—with those who share our values. Such multilateralism has enormous merits, although, goodness knows, it presents challenges; people and nations bring conflicting motives and aspirations to the table. However, we do the most good, and serve our own interests best, when we act in communion. Even when we disagree, it is always better to continue to jaw-jaw and to differ well. That is nothing more than good, sound, practical politics—and, I might add, sound theology too. It was also the ambition of our forebears in Parliament. Standing alongside Dean Acheson in 1949 was our own Foreign Secretary, Ernest Bevin. He said that,​

“democracy is no longer a series of isolated units. It has become a cohesive organism, determined to fulfil its great purpose”.

That purpose would best be achieved through multilateralism.

I need hardly tell this House that we live in interesting times. That is true of the debates, divisions and dissensions in the other place—and sometimes here. It is also true of the interesting environment into which the fine young men and women on-board HMS “Westminster” are sailing. It is tempting to imagine these times solely in geopolitical terms: as a broad historical sweep of a big political canvas. I submit that we should—indeed must—think of them another way. I hope the House will forgive me for praying in aid Mr Bevin once again. In 1949, as the great men of affairs signed the treaty, he reminded them of the motive and force behind it:

“The common people (who only want to live in peace) have been unable to follow their peaceful pursuits or to sleep safely in their beds”.

Its work meant, and means, that ordinary people are able to follow their peaceful pursuits and sleep safely in their beds. I find it hard to imagine a better ambition for any public institution. These are words that might be engraved on all our hearts, especially at the present time.