On 6th February 2020 the House of Lords debated a motion from Lord Hunt of King’s Heath, “That this House takes note of the National Health Service’s performance in relation to its priority area targets; and the impact of adult social care pressures on patients of the National Health Service, and their safety.” The Bishop of Carlisle, Rt Revd James Newcome, spoke in the debate: 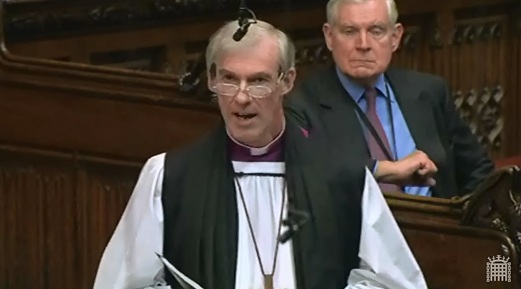 The Lord Bishop of Carlisle: My Lords, this is a very timely debate. I am most grateful to the noble Lord, Lord Hunt of Kings Heath, for securing it. I also look forward very much to the maiden speech of the noble Baroness, Lady Wilcox. We have already heard many statistics with regard to NHS targets and shall no doubt hear many more. But there seems to be general agreement that one of the biggest problems facing the NHS is what many now call a crisis in social ​care, which has been highlighted by this debate and emphasised by the noble Baroness, Lady Pinnock, and to which I will address this contribution.

The crisis consists of several factors—most already mentioned, so I will not repeat them—that lead to delays in discharge, the cancellation of elective operations due to lack of beds and an increase in A&E admissions, including elderly people whose health has suffered as a result of a lack of adequate care. All this is of course immensely costly in time, money and misery, as well as immensely disruptive for an NHS desperately trying to meet its targets. Given that the laudable aims of the NHS long-term plan will never be realised unless we sort out social care, what needs to be done?

I suggest that in the first place we remind ourselves just why this is so important. It is not only because it is vital for an effective NHS but primarily because the hallmark of a civilised society is the way in which it treats its vulnerable members. Recognising the intrinsic value and dignity of every member of our society, we want to offer care and respect to all, and aspire to the best by enhancing rather than just maintaining people’s lives. That will involve three fundamental changes. First, and most important, is the proper integration of health and social care. This was one of the main recommendations of the ad hoc Select Committee on the Long-term Sustainability of the NHS, mentioned by the noble Lord, Lord Hunt, of which I had the privilege to be a member. Although we now have a Department of Health and Social Care, there is still a very long way to go. The root of today’s problem was the separation of health and social care and their means of funding, even though they are linked aspects of health and well-being. Secondly, we need proper training, care and status of care workers. We need a professional, motivated and committed workforce who enjoy high esteem, which is not always the case at present. We also need to acknowledge the immense and invaluable contribution of unpaid carers.

Thirdly, social care in this country needs adequate funding. Noble Lords will have seen the seven key principles for that offered by the Health for Care coalition in our briefing note from the NHS Confederation. The need is estimated at an extra £8 billion per annum, which obviously has to come from somewhere. That somewhere is presumably our pockets. Of course, that is one reason why this subject is so politically sensitive. It is also one of the many reasons why we so urgently need the sort of cross-party consensus to which this Government have declared their commitment.

I support calls that have been made for a Select Committee or cross-party group of some kind to be established immediately to produce specific long-term proposals—that expression, “long-term”, has been used several times already in this debate—to break the current deadlock. There are plenty of previous reports on which to draw and although this might look like yet another delay to the long-awaited Green Paper, if it results in decisions and actions, that brief delay will be well worth it. Without it, the situation will only get worse to the detriment of all concerned. As we have already been eloquently reminded, a well-funded and good-quality social care sector is fundamental to a well-performing NHS.​

Baroness Brinton (LD)…My noble friend Lady Pinnock, who has considerable expertise in local government, talked about that perfect storm, and she is absolutely right. I welcome the comments from the right reverend Prelate the Bishop of Carlisle, and the noble Baronesses, Lady Gale and Lady Pitkeathley…

The Parliamentary Under-Secretary of State, Department of Health and Social Care (Baroness Blackwood of North Oxford) (Con):…I recognise, as was mentioned by the noble Lords, Lord Hunt and Lord Turnberg, the noble Baroness, Lady Pinnock, the right reverend Prelate the Bishop of Carlisle and many others, that in addition to the pressures on the health service, we are seeing increased demand in the social care system. We must put social care on a sustainable footing, with everyone being treated with dignity and respect. It is one of the biggest challenges that we face as a society..