On 14th September 2020 the House of Lords considered amendments to the Government’s Immigration and Social Security Co-ordination (EU Withdrawal) Bill, during its third day in Committee. 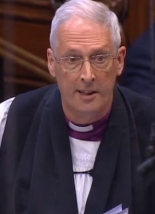 The Bishop of Southwark, Rt Revd Christopher Chessun,  supported amendments to the Bill to make EEA and Swiss nationals coming to the UK to work as a healthcare or social care worker exempt from the Immigration Health Charge

As is usual in Committee, the amendments were not pressed to a vote after debate, though some issues may be returned to again at a later stage. A transcript of the Bishop’s speeches is below. The text of the amendment supported by the Bishop are reproduced underneath.

The Lord Bishop of Southwark: My Lords, I support Amendment 54 in the names of the noble Lords, Lord Kennedy of Southwark and Lord Rosser. I am persuaded also by Amendments 55 and 65.

Returning to the parable of the good Samaritan, cited earlier by my right reverend friend the Bishop of Durham in relation to another amendment, we find a man who puts aside racial enmity because he is motivated by compassion, while others hurry about their business because to intervene would, at best, complicate their ​lives and involve their life in the struggling life of another. I had hoped that the pandemic, which continues, and the clarity with which the Prime Minister addressed his own condition and the part played in his recovery by a Portuguese and a New Zealander, might have at last persuaded the Government to review this burden by which we additionally tax migrants beyond what they have already paid.

We are talking about people who pay national insurance and income tax. Yet, for a person from abroad entering employment—for example, in health or social care—with a partner and two children—they must, in addition to extraordinarily high fees for a three-year visa, pay in advance for those years’ surcharge. That is currently £4,800 for four of them. In the projected hike of the surcharge this autumn, this will become £6,564.

How is this affordable? How is this morally justifiable? What country have we become that we think we can burden migrants in this way, yet we expect certain standards of other nations in how they treat people within their borders? I support the amendment.

“Immigration health charge: exemption for EEA and Swiss citizens who are healthcare and social workers

(a) a healthcare worker; or

(b) a social care worker.

(2) The exemption applies to a person who is a family member or dependant of an EEA or Swiss national who meets the condition in subsection (1)(a) or (b).

(a) “healthcare worker” means a worker who works in a healthcare setting within or outside the NHS who may come into contact with patients, including clinical administration staff and care home staff;

Member’s explanatory statement: This new Clause would ensure that EEA and Swiss nationals coming to the UK to work as a healthcare or social care worker would be exempt from the Immigration Health Charge.