On 21st July 2014, a Government statement on the Ukraine (Shooting Down of MH17) and Gaza was repeated in the House of Lords by the Leader of the House, Baroness Stowell of Beeston. The Bishop of Coventry, the Rt Revd Christopher Cocksworth, asked a supplementary question. 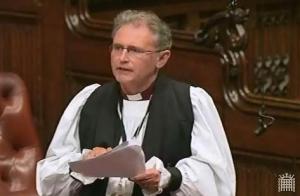 The Lord Bishop of Coventry: My Lords, perhaps I may return us to the tragic event of the downing of flight MH17 to join others in expressing deep and profound condolences to the families, friends and colleagues of those who died. In particular, I express the deep sympathies of those of us who spend quite a lot of our time caring for those who are bereaved and, in so doing, I pay tribute to the Protestant, Anglican, Old Catholic and Roman Catholic ministers who have been trying to care for the stricken families at Schiphol Airport. They have a very demanding task.

As we have heard, the bereaved are suffering from a deep and dreadful trauma. The deaths were sudden and led, of course, to shock on the part of those bereaved. They were inflicted by violence, leading to anger. They took place in foreign lands where, as we know, the bodies are out of reach—not only that but lying around in the heat, in body bags, in full view of the world’s media. Now, as the noble Baroness, Lady Royall, powerfully explained, they are being disregarded and disrespected. It is a psychological, pastoral and spiritual nightmare of unspeakable proportions. My question is simply: will the Government continue to use appropriate means to ensure that the bodies are treated with dignity in this period and, of course, returned with urgency?

Baroness Stowell of Beeston: Our first priority over the last few days has been applying pressure to Russia to use what influence it has to ensure that what occurs is exactly what the right reverend Prelate asked for. While this has not yet been confirmed, I hear that there are now reports that the refrigerated train has left Torez and is now en route to Kharkiv. That is exactly the kind of progress we need to see continue so that people are able to grieve, while knowing that their families and friends are being treated properly and being looked after by the people who they would want to be doing so.