“On behalf of the well-being of the children themselves, if we are going to make this increase in provision, which I am sure we will and indeed should, let us try to ensure that all the regulations that follow place the child at the centre, not the adults, whether those adults be the parents, the providers or the politicians.” – Bishop of Durham, 16/6/15

On Tuesday 16th June 2015 the House of Lords debated the Government’s Childcare Bill. Details about the Bill can be seen here. The Bishop of Durham, Rt Revd Paul Butler, spoke in the debate, raising concerns related to funding, capacity, pay and putting the needs of children first. The full text of his speech is below, with extracts from the Minister’s reply, and can also be watched on the Parliament website here. 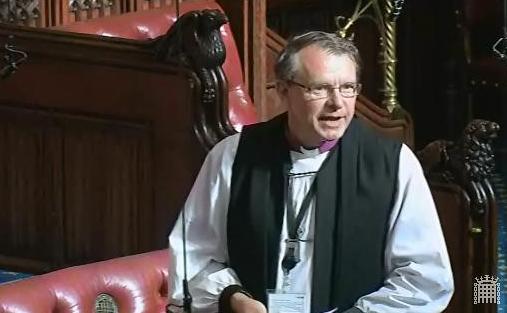 The Lord Bishop of Durham: My Lords, in welcoming the general intent of this Bill, I wish to raise a number of concerns. It seems to me that there are already several common threads in what is being said. It may well be that they will be addressed—they will need to be—in the secondary legislation, but to be able fully to support the Bill I believe this House needs some assurances regarding these concerns. In raising them, I wish to point out that I have consulted some who are engaged in this work already, and also those for whom it is intended to be a benefit—parents and, indeed, grandparents.

The first concern is the 38-week period. I recognise this is the pattern already established and ties in neatly with schools being among the key providers, either directly or by others using their premises. However, most working parents have only four to six weeks’ holiday per year, so they need childcare provision for 46 to 48 weeks a year. They end up having to pay for eight to 10 weeks. Potentially, providers under the new arrangements might insist that it is 30 hours for the whole year. That would mean doubling the costs in school holiday periods for those working parents. That would certainly prove to be a financial difficulty. It would certainly mean that the extra help of the 30 hours in the 38 weeks is reduced by eight to 10 weeks’ worth. So I have two questions for the Minister. Will the regulations make it clear that providers offering childcare outside the 38 weeks will not be able to insist that parents take up 30 hours each week in those other weeks? Alternatively, can the Minister confirm that, as I think he indicated in his opening speech, parents will be allowed to spread their entitlement of 1,140 hours per year over either a 48 or even a 52-week period? If it is 48 weeks, it amounts to almost exactly 24 hours per week.

The second concern is the capacity for providing all these extra hours. Let me illustrate. A Baptist church in the East Midlands noted:

“Many providers are not in purpose built facilities and will have to consider that children may need a sleep due to being on site for more hours. We would also need to provide meals–possibly hot, and neither facility is necessarily available”.

It asked whether help would be given help to pay for new equipment to supply that sleeping and catering facility. On a different issue, a nursery in east London wrote:

“Our nursery is almost 100% funded children only accessing their 15 hours. There are 45 children in the morning and 45 in the afternoon. We are at capacity so currently can offer 90 children a place. If all the children qualified for 30 hours we could not increase capacity further so we would only be able to take 45 children instead of 90 therefore effectively halving the amount of places we have to offer to local children. Financially it would make no difference to us but for parents their choice will be reduced”.

The doubling of provision will create major issues of capacity. There is some time for those to be addressed, but this House needs assurance that serious thought has been given to how this doubling of capacity will be handled, remembering that many providers use church and community halls and that the hours they already have may be the maximum that the hall owners can offer. Some will simply not be able to extend to 30 hours in their current premises. Will they be helped to find and establish new premises, or will they have to close? If the latter, the diversity of types of provision available to parents at present will be in serious jeopardy, which will be a weakening of the policy, not a strengthening of it.

Thirdly, there is the financing of this increased provision. Here is a comment from a provider in east London boroughs:

“We have 5 nurseries generally in the PVI sector … the funding for 3 & 4 year olds is already not covering the cost and we rely on parents wanting/needing more than 15 hours who will pay an hourly rate that makes up the difference. In 3 out of 5 of the nurseries this doesn’t really happen and parents just take 15 hours free care. 30 hours a week free will really put a strain on our finances”.

I already noted concerns about capital costs. There is an added concern about proper salaries. The same east London provider comments:

“Our Nurseries are all in London boroughs, we are trying so hard to get to a point where we can pay London living wage £9.15 ph to all our staff meaning an increase in all salaries to differentiate qualification etc but hourly funding rate of as little as £3.56 leaves little room for manoeuvre”.

While I recognise that this increased provision is already a major call on the public purse, the opportunity needs to be taken to ensure that staff are paid properly, ideally at the living wage.

On finances, we must note that the increase in provision may not be cost-free for the working parents. As one parent of twins in County Durham noted to me about the existing provision:

“Childcare costs are so expensive especially when having twins to pay for. This provision would take a lot of pressure off my in-laws who are currently doing the majority of the childcare, as we currently only get 15 free hours each child per week however we still have an invoice to pay at the end of the month to cover the shortfall and meals and we can’t afford to pay for more childcare”.

That mother notes that her husband is self-employed, so has intermittent income, and that they pay a shortfall cost for meal and other provisions. They are concerned that with 30 hours, that will increase.

Finally, I return to a concern I raised during our recent debate on the gracious Speech, which is of the impression increasingly often created that a parent choosing not to work but to raise their child themselves is somehow not doing the best for the nation or the child. Here is what a couple of providers of childcare—I stress that point—wrote to me for this debate:

“My concern about the new Child Care Bill is that we are going further down the road of putting pressure on parents and mothers in particular to be valued as economic units rather than having the most important role of parenting their children valued. I did take a break from employment when my children were young and I am very pleased I was in a position to do so although it was to mine and my family’s financial detriment; the value of it to my children’s well being cannot be measured”.

I had this from another provider:

“I remember speaking to you”—

“about the domination of the ‘childcare’ agenda and how mentioning ‘stay at home parenting’ was met with a brick wall. I am increasingly concerned about the promotion of childcare as it is giving the implicit and not so implicit message that it is better to put your child in childcare and go out to work than stay at home and look after your own children. I would far rather be advocating looking at why the cost of living is so high ie housing crisis etc. which forces people out to work. I’ve had parents ‘apologising’ about their desire to stay at home—as if it’s a sin. I really wonder what kind of society we will have in the next 20 or 30 years if this push for more childcare continues unabated. I feel like the 0-3 year olds in this nation should not be ‘robbed’ of the opportunity to be cared for by their own parents and more could be done to make this possible. They are vulnerable members of our society who seem to have no voice”.

This is perhaps the greatest concern that I have. The whole agenda seems to be about the adult first—their right to work, their economic well-being, rather than the child first. What is the best for the young child? They cannot speak for themselves in this debate. In conclusion, then, on behalf of the well-being of the children themselves, if we are going to make this increase in provision, which I am sure we will and indeed should, let us try to ensure that all the regulations that follow place the child at the centre, not the adults, whether those adults be the parents, the providers or the politicians.

…Although it is true that many primaries may be full, many have capacity; it varies substantially by geographic location. I take the points made by the right reverend Prelate the Bishop of Durham, my noble friend Lord True and others about the specific capacity of certain providers….

…The right reverend Prelate the Bishop of Durham, the noble Baroness, Lady Pinnock, the noble Lord, Lord Sutherland, the noble Lord, Lord Touhig, and the noble Baroness, Lady Bakewell, raised the question of stretching provision over a longer period than 38 weeks. The Bill will allow this, as is already allowed for the 570 hours offered at the moment. Regarding the current 570 hours—15 hours a week—we say in guidance that parents and providers need to be aware that there is no requirement for all early years education to be delivered over 38 weeks. Local authorities should enable parents to take the current entitlement in a pattern of hours that stretches the entitlement by taking fewer hours over more weeks where there is sufficient parental demand and provider capacity. Delivering flexibility for parents is an important principle for government in this Bill and will be important in consultation and in the funding review.

The right reverend Prelate the Bishop of Durham raised a point about providers insisting that parents have to purchase hours during holidays as a condition of getting the free entitlement. We are clear in our current statutory guidance, and therefore in the contracts between local authorities and providers, that the 15 hours of early years education should be free of charge to parents. We do not want to see conditions or extra costs attached. The Childcare Bill gives us full powers to impose similar requirements, and we will be examining this carefully in consultation….

..The noble Baronesses, Lady Pinnock and Lady Massey, along with the right reverend Prelate the Bishop of Durham and others, talked about the thrust of the Bill and the needs of the child. I assure noble Lords that quality will be central to our provision, and in all things my department seeks to put the child first…