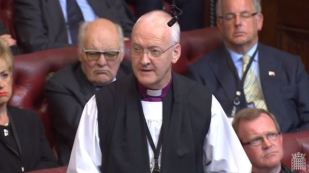 On 18th October 2016, Lord Collins of Highbury asked the government what assessment they have made of the potential effect on peace and stability in Europe and around the world of the United Kingdom leaving the European Union. The Bishop of Leeds, Rt Revd Nick Baines, spoke in the debate about the importance of continued interdependence for peace and stability.

The Lord Bishop of Leeds My Lords, recognising that this debate and that to come on Thursday belong together, although I cannot be here on Thursday, I offer this statement by the German theologian Jürgen Moltmann in a book that I finished reading on the train today:

“A free society is not an accumulation of independent individuals; it is a community of persons in solidarity”.

I quote this because the same might equally be applied to nations. It bears repetition that the language and discourse of the referendum—shamelessly, in my view, fuelled by misrepresentations and misleading promises, now apparently acceptable in a so-called “post-factual” world—paid little or no attention to the needs or securities of our international neighbours. They focused purely on the national interests of Britain, as if we can live in isolation or that we can be secure without ensuring the security of our neighbours. I invoke the poet John Donne: in a globalised world, Britain cannot simply see itself as an island.

Although the referendum campaign was dominated by immigration and the domestic economy, with wild promises that should always have used the language of “might” rather than “will”, questions about foreign relations and the security implications of a decision to remain in or leave the EU were too often dismissed as if an impertinent intervention by an embarrassing relation.

So the decision to leave the EU now raises questions that should have been identified and fleshed out before the referendum—questions that assume our place as a nation interdependent on a community of nations. If Europe has been focused for a generation or more on integration, it is surely now coloured by a hint of disintegration.

To return to those questions, an example is: Brexit will be hugely demanding of energy and resources, so what will the impact of this be on other areas of government? We hear bold promises that Britain will not retreat in on itself; but if revenues are reduced, costs increase, the pound continues to fall and the focus of resource is on Brexit, what will happen to work with the UN Security Council, NATO, the G7, the G20 and the Commonwealth? Furthermore, is it not inconceivable that this diversion of energy, focus and resource might just create the space for mischief-making by those who might be described as “not our best friends”?

Peace and stability cannot be achieved by an approach that is rooted in us simply looking to our own best interests. As we see around the world, particularly in the Middle East, security, peace and stability must be mutual. To seek the security of neighbours, which is essential, is costly.

I have further questions. The last strategic defence and security review was published in November 2015, yet the brave new post-Brexit world will look different from the one assumed a year ago. It is likely, for instance, that increased and enhanced EU defence co-operation—potentially intensified outside NATO—will impact both on the UK and NATO. In turn, if we invest more in NATO, this will have an impact on our relationship with and towards Russia, and this will impact on our response to threats to Poland and the Baltic states. To put it differently, how might greater EU defence co-operation impact on the Government’s stated SDSR ambition to,

“intensify our security and defence relationship with Germany”,

It would beggar belief that such questions have not been thought through in detail before now. To put it less charitably, where were the experts when we needed them?

To change tack a little, we recognise that the UK is one of the biggest contributors to the European Development Fund, currently contributing £409 million, which amounts to 14.8% of total contributions to the fund. Have the Government yet assessed the impact of Brexit on the EDF? Will Brexit lead to a narrower disbursement of UK aid to a narrower geographical reach than currently channelled through the EDF? Can the Government give an assurance that the UK’s overseas development aid will continue to be spent on genuine ODA purposes and not be used as sweeteners for trade deals, given that trade deals are currently being represented as the highest social good—a questionable anthropological priority at best?

Peace and security are not merely notional aspirations, but demand a broader and deeper vision of what a human society actually is, and for whom it is to be ordered. Peace and stability cannot be empty or merely utilitarian words to be thrown around carelessly in a post-factual world. They demand the prioritising of mutual international relationships and detailed costings—not merely financial or economic, but human, social and structural.

Baroness Goldie (Minister) [extract]: The right reverend Prelate the Bishop of Leeds, in a reflective contribution, quoted John Donne. If my memory is correct, the rest of the quotation is:

“No man is an island, entire of itself;

every man is a piece of the continent,

a part of the main”.

I agree, because for the UK, the continent and the main, in the global world, includes countries beyond those in the EU, but together with all these countries, we have a mutuality of interest. It is very important that we do not lose sight of that.