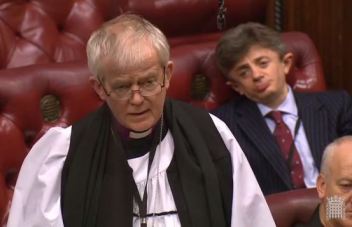 On 9th November 2016, the House of Lords considered the Government’s Policing and Crime Bill at its Committee Stage. An amendment tabled by the Bishop of St Albans was debated that would allow local authorities to regulate the number of fixed-odds betting terminals in their areas. In the absence of the Bishop, Lord Beecham moved the amendment and the Bishop of Salisbury, Rt Revd Nicholas Holtam, spoke in support:

The Lord Bishop of Salisbury My Lords, I thank the noble Lord, Lord Beecham, for moving the amendment. I stand in place of my colleague the right reverend Prelate the Bishop of St Albans, who is unable to be here today, in support of Amendment 214, which would grant new powers to local licensing authorities in regulating gaming machines on gambling premises. As the noble Lord, Lord Beecham, has already made clear, there is a strong case for measures that will help local authorities tackle gambling-related crime to be included in the Policing and Crime Bill.

The figures on the rise of gambling-related crime are startling. From 2014 to 2015 there was a 50% increase in the number of incidents on gambling premises that required police assistance. The right reverend Prelate the Bishop of St Albans recently submitted a freedom of information request to the Metropolitan Police which found that there had been a 68% increase in the number of violent criminal offences at London betting shops between 2011-12 and 2015-16. It has recently been reported that around 40% of commercial robberies in London target betting shops.

There is likely to be a range of factors driving this increase in violence. Opportunism arising from the single staffing of betting shops is surely one of them. Another is the increasing reliance of high-street betting shops on fixed-odds betting terminals, or FOBTs. As a report from Landman Economics put it:

“It seems clear that violent behaviour in betting shops is on the increase and an increased proliferation of FOBTs—with increased numbers of players incurring losses from gambling on B2 machines—is a likely reason for this trend”.

There are countless recorded examples of so-called “FOBT rage”, in which customers destroy machines or assault staff after losing large sums of money. What is more, we know that a great number of these incidents go unreported by betting shops.

It is not just violent crime that is increasingly associated with FOBTs. In 2015, 633 instances of suspected money laundering were reported to the Gambling Commission by betting shop staff, and there is no way of knowing the full extent of the problem. Several local councils, including Hounslow, have also raised concerns that the anonymous nature of FOBTs lends itself to underage gambling. These concerns have led several local authorities to call on Her Majesty’s Government to grant them greater powers when it comes to imposing conditions on a gambling premises licence. This amendment therefore comes with the support of the Local Government Association, as well as with endorsements from the councils of Westminster, Brighton and Hove, Brent and Leeds.

Given that FOBTs now contribute well over 50% of the profits of high-street betting shops, that restriction seems like an outdated anomaly. Amendment 214 would either allow licensing authorities to limit the number of FOBTs permitted on a premises or allow them to impose conditions on the method of operation for gaming machines more generally—for example, by requiring account-based play or by requiring customers to confirm their identification with staff prior to play. By removing the possibility of anonymous play, not only would conditions such as these prevent money laundering and underage gambling but they would be likely to reduce the number of violent and aggressive incidents towards staff, while facilitating more effective implementation of self-exclusion.

Amendment 214 would also make it clear that licensing authorities do not have to assess licensing applications in isolation but can take into account the cumulative impact of a range of local factors in making a decision, whether they be social deprivation, local crime rates, the proximity of local schools or addiction treatment centres, or the presence of a betting shop cluster. Currently the legislation is not clear on this point, so the amendment would also provide licensing authorities with clarity and confidence about the options open to them. If Her Majesty’s Government are not willing to accept an amendment in primary legislation on this matter, I hope that they will issue clear guidance, particularly on the potential for licensing authorities to use cumulative impact assessments, through the Gambling Commission.

I should emphasise to the Committee that the amendment is not an attack on the gambling industry; it seeks only to give licensing authorities the tools they require to better enforce the existing licensing objectives. Licensing authorities would not be able to impose these conditions on a whim. They would have to show that conditions were proportionate and reasonable in protecting the licensing objectives. These new powers would make a real difference, not just in reducing crime but in protecting the vulnerable, and I hope that Her Majesty’s Government will consider them carefully.

The full response of the Minister responding is below:

Baroness Chisholm of Owlpen: My Lords, as the noble Lord, Lord Beecham, and the right reverend Prelate explained, these amendments would have the effect of devolving power over licence conditions for gaming premises and gaming machines to local authorities. The number of gaming machines authorised under a gambling premises licence is regulated by the Gambling Act 2005. Licensing authorities do not currently have the power to change this limit, and cannot impose licence conditions on gaming machines that relate to stakes or prizes. However, they do have licensing powers in respect of gambling premises. These include powers to reject an application for a licence and powers to impose other conditions, for example around opening hours. They can also review and revoke licences. The Department for Communities and Local Government also brought in new planning laws last year that ensure that applications to change, for example, a disused shop into a bookmaker’s office will need planning consent.

In looking to introduce this new clause, the right reverend Prelate is seeking to limit the number of fixed-odds betting terminals in bookmakers and casinos. The Government understand the concern that such gaming machines could fuel problem gambling and are committed to reducing the risks of potential harms associated with such machines. Indeed, last year, we introduced new regulations to ensure that players staking over £50 on these machines either had to open an account or had to interact with staff. Evaluation shows that there has been a significant decrease in players staking above £50. The Gambling Commission also introduced new social responsibility requirements last year, including measures that force customers to make an active choice on whether to set time and money limits while playing these machines.

In addition, the noble Lord, Lord Beecham, is seeking to enable licensing authorities to impose minimum staffing levels on premises with such machines. The noble Lord may have in mind a number of tragic incidents in high street bookmakers over the last few years. The Association of British Bookmakers’ Safe Bet Alliance provides specific guidance on staffing security in bookmakers, which was drafted with the input of the Metropolitan Police. Members of the Association of British Bookmakers operate single staffing only when a risk assessment has been undertaken.

Sections 167 and 168 of the Gambling Act 2005 empower the Secretary of State for Culture, Media and Sport to set mandatory and default conditions on premises licences via secondary legislation, which could include a condition setting staffing levels. This would be the preferred route to make such a change. In addition, I must emphasise that the Government believe that the appropriate mechanism for reviewing stakes and prizes, and gaming machine numbers, is the review announced on 24 October by the Minister responsible for gambling, which will consider these issues in a more holistic and comprehensive context.

My noble friend Lord James mentioned statistics about roulette wheels. I have to say that I got slightly lost in all the various numbers, which is not surprising considering that I was unable to add the 45 minutes when it came to the lunchtime break—but I certainly take his point and I listened with interest.

The noble Lord, Lord Beecham, talked about the Sustainable Communities Act. The Government are engaging with the LGA on this issue. The review announced on 24 October is the right mechanism to consider all these issues, and the Government invite Newham Council to take part in that review.

The Government are alive to the concerns about the dangers posed by fixed-odds betting terminals. As I have set out, we have already taken steps to tighten the controls on these machines and have set out our plans for the review of gaming machines, gambling advertising and social responsibility, which will include stakes on fixed-odds betting terminals. I am sure that the right reverend Prelate, the noble Lord, Lord Beecham, and other noble Lords will want to contribute to that review, and I encourage them to do so. The review will include a close look at the issue of B2 gaming machines—more commonly known as fixed-odds betting terminals—and specific concerns about the harm that they cause, be that to the player or the community in which they are located. The call for evidence period will close on 4 December, following which the Government will consider proposals based on robust evidence provided to assist in our decisions.

Given that this process is in train, I invite the noble Lord, Lord Beecham, to withdraw the amendment.

Lord Beecham: I thank the noble Baroness for her reply, so far as it goes, which I fear is not very far at all. If the Government are relying on the industry to come forward with proposals, many of us would be somewhat sceptical about a satisfactory result emerging.

I am not, as some of your Lordships will be aware, an enthusiast for secondary legislation but it seems to me that it would be sensible for the Government to take the power, at least, to regulate in some of the areas we have discussed, even if they do not want to incorporate the specific details of the amendments we have been discussing today in primary legislation. It would be a wasted opportunity, it seems to me, if, as I suspect, the gaming industry will not come up with satisfactory answers to the many questions which have been raised today, to then expect a further Bill to come forward. The legislative timetable, many of us will imagine, will be dominated by things of a rather more international flavour for the next few years, whereas, giving the power to regulate on issues of the kind we have identified here would be a much simpler parliamentary process and one which is quite appropriate.

I do not think that many of us in your Lordships’ House have any great confidence in the gaming industry’s willingness to address the problems that have been identified across the House this afternoon. While at this point I will obviously not be asking the House to divide, this is a matter that I hope the Government will consider in a constructive way before Report. I would be tempted, and will discuss this with other of your Lordships, to embody in resolutions on Report a power to deal with matters as I have suggested by way of secondary legislation, but it would be better if the Government took that step. No doubt the noble Baroness will be willing to discuss this with interested Members before Report, but as matters stand I beg leave to withdraw the amendment.

The full debate on the amendment can be seen here.

The speeches in support of the amendment came from Lord Beecham, Lord Clement Jones, Baroness Howe of Idlicote, Lord James of Blackheath, Lord Paddick, and Lord Rosser. No Peer spoke against.