On 29th June 2017 the Bishop of Peterborough, Rt Revd Donald Allister, spoke during the final day’s debate on the Queen’s Speech, highlighting the need for a more effective approach to delivery of mental health services: 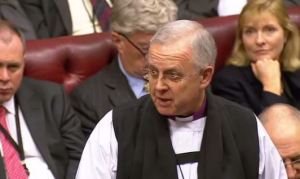 The Lord Bishop of Peterborough: My Lords, it is perplexing, given Mrs May’s commitment to mental health, that there is no mental health Bill in the Queen’s Speech, not least given the very strong commitments that were made about the need for legislation and the fact that this would happen. What there is in the Queen’s Speech about mental health is good, though it is vague. I hope that it is translated into more money for mental health, but it also needs to be translated into better delivery and accountability. That is what is lacking and what I want to think about for a moment.

We have been told time and again under Governments of different hues about parity of esteem for mental health and other forms of health treatment, but what happens is that Governments tend to set up bodies to deliver health, whether it is clinical commissioning groups, hospital trusts, NHS England, child and adolescent mental health services or local authorities delivering public health. All these groups are there, possibly they are all needed but it is not clear that they all talk to each other, and when questions and challenges are brought here or to the other place we are told, “That is the responsibility of NHS England”. In recent years, when mental health spending, we are told, has been increased, or allocation of money for mental health increased by government, NHS England has chosen to spend it on other areas of health. When we have asked in your Lordships’ House why this money is not being spent, we are told it is the responsibility of NHS England. This is not good enough. We have a National Health Service and the Government must be in charge of it. Of course, they need to work through other bodies in various ways, but they need to take responsibility and to be held accountable. It is not good enough for the Government, of any hue, to say, “It is up to NHS England”, or, “This decision was made by a clinical commissioning group”, or whatever. If it is government policy, the Government must ensure that it is delivered and must take responsibility for its delivery and not fob that responsibility off on to others.

It is not just a question of delivery or operational responsibility—“operational” is a wonderful weasel word sometimes, a way of saying that other people are going to do it and we are not going to interfere. If you are in charge, you have to interfere sometimes to make sure that it is done. I am not quite sure what “operational” means, other than a hand-washing exercise, I fear. It is not just operational delivery; it is about guidelines. We see all too often in the health sector that the Government give guidelines and local hospital trusts, clinical commissioning groups or whatever have their guidelines to follow. But if they do not follow them, nothing seems to happen.​

Take the example of chaplaincy in mental health. I am particularly interested in mental health and I obviously have an interest in chaplaincy as well. The Royal College of Psychiatrists has recently issued a report highlighting the importance of spiritual care—another way of describing chaplaincy—in mental health, and spiritual care providers working with other clinicians to deliver good outcomes for mental health. Yet local trusts, mental health trusts and acute trusts, have guidelines on how many chaplains should be provided, and how many of different religions, faiths, backgrounds, denominations and so on, according to proportions in population, but there is no compulsion on them to employ that number of chaplains or in that proportion; it is simply a guideline. The Department of Health does good work, it produces good guidelines and I do not criticise the guidelines at all, but it then allows other bodies it sets up to ignore those guidelines, or to deliver less than the guidelines require or suggest.

I urge the Government to carry out the commitments, and they are good commitments, for mental health care in the Queen’s Speech, I am delighted to see them there, but please can we see those commitments delivered in such a way that the Government remain responsible and in charge, so that those of us here and in the other place can question the Government and get clear answers when things are not going quite right?

Baroness Walmsley (LD)…I join the right reverend Prelate the Bishop of Peterborough in asking the Government to ensure that the funding for mental health services reaches them and is not diverted to other services. Timely access to preventive care, a whole-system approach and sufficient funding will do more than any legislative change ever could.

Lord Hunt of Kings Heath (Lab)…The other point to make on mental health was made by the right reverend Prelate the Bishop of Peterborough. It is that over the past few years, Ministers have made very welcome statements about the priority that mental health is to be given. We do not dispute any of that, but it does not happen. We know that clinical commissioning groups are cutting mental health budgets. In the end, Ministers have to take responsibility. They cannot simply say that they have made these edicts and CCGs have been told to do it, and then we have a situation where clearly CCGs cannot do it because they do not have the money, they have conflicting priorities and they are left in an impossible situation. So any further statement by Ministers on mental health will be treated with a touch of scepticism in your Lordships’ House until we get to the point where we see the additional money ring-fenced and guaranteed to be spent on mental health.

The Parliamentary Under-Secretary of State, Department of Health (Lord O’Shaughnessy) (Con)…Regarding mental health, the Government have a better story to tell than perhaps we have been given credit for. There is much more money going in—and, yes, it is getting to the front line, as well as other commitments, including waiting time commitments on treatment. There is an issue to be discussed, at another time, about the extent to which we have ring-fencing and direction, because the whole way the NHS ​works is predicated on clinical autonomy. Just as with the operational autonomy of the police force, that autonomy is rather important. Of course there should be targets—or goals, if you like—and sometimes they will be in conflict with one another. Nevertheless, it needs to be for professionals to make that decision. We will bring forward the Green Paper on children’s and young people’s mental health that the noble Earl, Lord Listowel, hoped for. I can reassure him on that front.