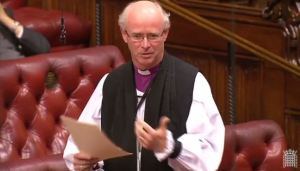 On 22nd March 2018 the House of Lords debated a motion from the Foreign Office Minister Lord Ahmad of Wimbledon, “That this House takes note of the Commonwealth Heads of Government Meeting 2018.” The Bishop of Rochester, Rt Revd James Langstaff, spoke in the debate:

The Lord Bishop of Rochester: My Lords, the Anglican Communion extends significantly beyond the nations of the Commonwealth. Nevertheless, for obvious reasons of history, there is a very substantial Anglican presence in many Commonwealth countries. I am therefore pleased to speak from these Benches in this debate—and I, too, look forward to the maiden speech of the noble Lord, Lord Geidt.

Within the Anglican Communion we have a rich network of companion links between dioceses in different parts of the world, whereby most Lords spiritual will have an active engagement with the life of at least one Commonwealth country. The nature of the Commonwealth as a network of autonomous free nations also has some parallel with the life of the communion, wherein each province is autonomous yet links together through what one might call family likeness, and the position of honour granted to the most reverend Primate the Archbishop of Canterbury.

The theme of the forthcoming Commonwealth Heads of Government Meeting, “Towards a Common Future”, resonates with the experience of these Benches. In our relationships with our companion dioceses within and beyond the Commonwealth, we are of course conscious of a shared past. Without it, the relationships would not exist. We are also conscious of some of the ambivalences of that shared past, especially the mixed legacies of colonialism. But these companion links that we nurture are devoted to sharing our common present and building our common future.

We share with the Commonwealth and our companion dioceses a great number of areas of concern and involvement, not least around, as some have already mentioned, climate change, resilience, sustainability, issues of human trafficking, modern slavery and gender violence, the roles of women and young people, and the building of positive frameworks in civil society. We are very pleased that people from across the Anglican Communion will be participating in some of the forums around the forthcoming meeting—for example those from Swaziland, Mozambique and Sri Lanka in the forums concerned with women and young people.

I am very grateful for the contribution just now from the noble Lord, Lord Alton. Unfortunately, it is the case that some of the worst-offending countries when it comes to religious freedom are found within the Commonwealth. In the margins of the Heads of Government meeting, the most reverend Primate the Archbishop of Canterbury, working with the Commonwealth Initiative for Freedom of Religion and Belief, is convening a gathering of parliamentarians and religious leaders to discuss over two days how ​they may, among other things, hold their Governments and constituencies to account in relation to these concerns around religious freedom. I think that some Members of your Lordships’ House will be participating in that event. I trust that the Minister, in responding to the debate and to the issues raised by the noble Lord, Lord Alton, will welcome the initiative of the most reverend Primate and might indicate how these efforts from within the churches and other faith communities in relation to religious freedom might usefully complement the Government’s engagement in these matters within the Heads of Government meeting and in other fora.

My diocese has companion links with two Anglican dioceses in Tanzania. We also have a link with the diocese of Harare in a country that many of us wish to see as an active participant in the Commonwealth once again before too long. In my diocese, well over 30 parishes and schools have active relationships with parishes or schools in Tanzania or Zimbabwe, and I myself will visit both countries later this year.

I state very clearly that all these partnerships hugely enrich our lives and that the benefit is two way. For example, working also with the development agency Tearfund, we are forming relationships and promoting initiatives that seek to enable villages in Tanzania to become self-sufficient, with no dependence on aid. This is about mobilising local capacity and initiative—economic, social and spiritual—to develop agricultural resilience, educational opportunity and economic productivity. Clearly there is benefit to our African friends—I have seen it on the ground; it is immense—but also, because the relationship of dependency is removed as local capacity grows, the relationships become those as between equals, and that is hugely important.

My friend the Bishop of Kondoa in Tanzania leads a diocese in a very rural part of the country where the population is more than 90% Muslim. Neither community compromises on its beliefs, yet there is in many places an ease of relationship and a mutual respect from which we in this country can learn a huge amount. I recall visiting one place where, although it was Ramadan, the Muslim village elders came out in numbers to greet the bishop and me. Indeed, they greeted the bishop as “their” bishop. I learned later that they had donated to the church in that village land on which to build a church building and the priest’s house. In another place, the local councillor—a Muslim—was the first to donate a substantial sum to put a roof on a new church building. In the town of Kondoa itself, the diocesan Bible school, as well as training priests and lay ministers, runs a year-long empowerment programme for young women. On that programme, Muslim and Christian women study together alongside each other. These are practical examples from which certainly I have learned a great deal.

At risk of slightly breaking the irenic tone, there is one little matter I wish to raise with the Minister relating to the mutuality of hospitality, or some of the restrictions on it. It is, of course, the vexed issue of visas. I may travel and people from my parishes may travel freely to Tanzania. It is not always possible for people to come back the other way, and we feel somewhat embarrassed about that. It is easy enough to get visas for bishops to visit: it is the ordinary people, very often. Whatever guarantees we may give, ​many of these people lead subsistence lives in a subsistence economy and would not have any need for a bank account, and thereby find it hard to demonstrate, as it were, their bona fides. If we could have some further conversations with Her Majesty’s Government about that, we would be hugely grateful.

From these Benches, I welcome the opportunities we have to take forward our work of partnership within the wider context of Commonwealth relationships, and I wish the Heads of Government well for their forthcoming meeting.

The Minister of State, Foreign and Commonwealth Office (Lord Ahmad of Wimbledon) (Con):…The issue of fairness is a key element and pillar of the Commonwealth discussions, and it has been raised by a number of noble Lords. The right reverend Prelate the Bishop of Rochester, the noble Lord, Lord Alton, my noble friends Lady Bottomley and Lord Suri, and the noble and learned Lord, Lord Judge, all raised the broad issue of human rights, but also specific ​issues within that context. First, on freedom of religion and belief, as with the previous summit in Malta in 2015, the Heads of the Commonwealth have recognised the freedom of religion and expression. The summit will encourage the Commonwealth to build on that. As noble Lords will know, the Government have also provided funding to the Royal Commonwealth Society’s inter-faith service, which was extremely well attended in Westminster Abbey on Commonwealth Day, 12 March. Freedom of religion and belief is a priority for the Prime Minister, for the Secretary-General and for me, as Minister for Human Rights. We will discuss this bilaterally and during the course of the Commonwealth summit through various forums. I also acknowledge the great work done by Lambeth Palace. We look forward to the event that is being organised on this issue in the margins of the Commonwealth summit during the course of the week. I pay particular tribute to the most reverend Primate the Archbishop of Canterbury for his continuing support and leadership on this important issue.