The following article by the Bishop of St Albans  appeared on the Politics Home website on 12th September 2018: 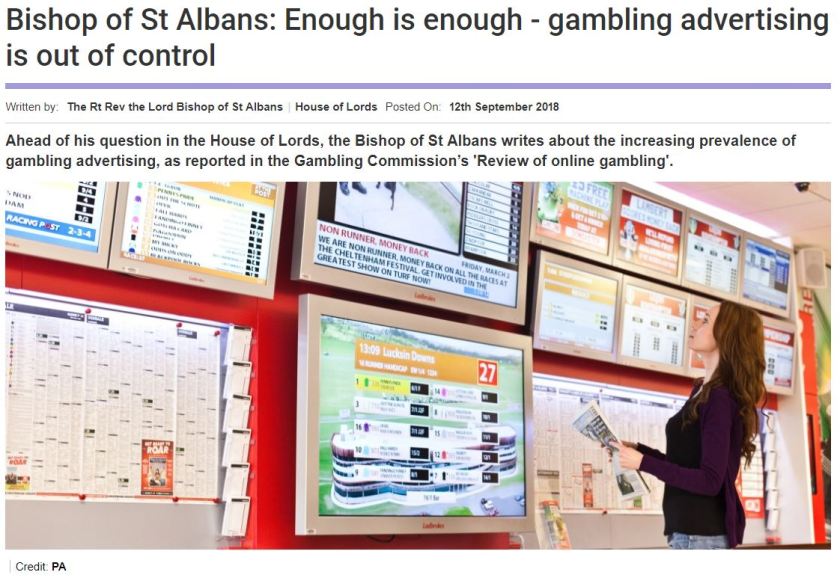 Gambling advertising is out of control – I know it, parents know it and it’s about time the government get to know it.

As autumn begins and Parliament returns from the recess it’s worth reflecting on this summer. Many people will remember the sun and, of course, the World Cup. Despite enjoying the matches, many parents were horrified at the way their children were bombarded with gambling adverts throughout the competition. These adverts dominated every match, especially the ‘live-odds’ adverts which placed extensive pressure on viewers to bet.

The relentless repetition of these adverts became a feature of the World Cup for many and no more so than for the UKs estimated 430,000 problem gamblers. These victims of the gambling industry cost the tax-payer between £260 million and £1.2 billion every year. As Simon Stevens, Chief Executive of NHS England, has pointed out gambling addiction is causing additional strain on our hard-pressed medical services. The NHS is possibly spending an eye-watering £610 million just on hospital inpatient services for problem gamblers alone.

One group of researchers this summer attacked the industry as being ‘addicted to addiction’ and tragically gambling addicts are paying the price for the industry’s relentless desire for increased profits.

It is especially worrying that children are being targeted, as was shown by the BBC Radio 5 Live Investigates programme last week, linking leading football clubs with gambling sites. Already, children on average will be seeing more than three adverts from betting firms every single day. Those who tune in to watch their favourite sports matches see even more. It can’t go on like this – children have had enough. Young people, when asked, expressed their dislike of these adverts but tragically it is already having an effect.

Rates of child problem gamblers have remained depressingly stable despite the rates of overall gambling among children going down. Academics suggest that this statistical quirk means those who are gambling are experiencing greater problems than those who gambled previously.

I have already spoken of my concern that adverts are helping to normalise gambling for a new generation. The industry claims that it is acting responsibly. Splashed across their commercials is the phrase: ‘When the fun stops, stop.’ The advert is, in fact, designed to encourage gambling as the word ‘fun’ is the biggest word in the strapline and is in capital letters. On top of all this it is also totally ineffectual. Just half of children polled have actually seen the phrase – despite them watching on average 3.8 adverts a day.

This state of affairs, where self-regulation is essentially meaningless and problem gambling rates blight hundreds of thousands of people’s lives, can not last very much longer. Yet in all this white heat of energy wasted on discussing the minutiae of the gambling industry, there is a very simple solution.

Strong yet sensible regulation is the best defence for our country’s most vulnerable and the government has a responsibility to protect those being assaulted by endless gambling advertisements. As we basked in this summer’s heatwave, Italy banned gambling advertising – in its entirety. An already tightly regulated market for the gambling industry, it is little wonder Italian problem gambling instances are comparatively low.

With its close grassroots involvement with communities across the entire country, the Church of England has begun to focus on this important issue. My diocesan synod has already passed a motion calling for greater regulation for the gambling industry especially around advertising. This motion will be debated by General Synod in the next few months.