On 11th July 2019 Lord Elton led a debate in the House of Lords  “That this House takes note of the extent of persecution of people of faith in this century.” The Bishop; of Chelmsford, Rt Revd Stephen Cottrell, spoke in the debate: 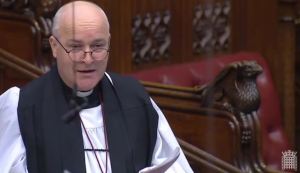 The Lord Bishop of Chelmsford: My Lords, I too am grateful to the noble Lord, Lord Elton, for this opportunity to examine the extent of persecution of people of faith. I will not repeat the heart-breaking stories of the terrible atrocities that besmirch our world, but they are of course the day-to-day reality for so many people of faith. I thank the noble Lord, Lord Alton, and others for telling those stories—they need to be heard.

The diocese I serve as Bishop of Chelmsford covers east London and Essex and contains some of the most diverse and rapidly changing communities in our land. Here, faith leaders and grassroots worshippers from all religions are engaged in some of the most humbling and encouraging initiatives to hold fast to that most irreducible of godly virtues: peace. Although east London is often a place where bridges are built, sadly, it is also too often an arena where the backwash from religious intolerance, persecution and strife from around the world is felt. We are a global village, but sadly we are also a global playground where much cruelty and intolerance go unchecked.

Your Lordships may be familiar with the work of Brian Grim and Roger Finke and their thesis The Price of Freedom Denied. They have analysed annual reports published by the United States State Department and observe that worldwide religious persecution, defined here as physical abuse or displacement from homes because of religion, is “pervasive and pernicious”. Of 143 countries analysed, 86% have documented cases of religious persecution, spanning every region of the globe and every faith community. Grim and Finke conclude that religious freedom is a key ingredient to peace, stability and prosperity. Therefore, when Her Majesty’s Government defend and promote freedom of religion and belief, they build peace.​

I commend the recommendations of the report commissioned by the Foreign Secretary into the Foreign and Commonwealth Office’s support for persecuted Christians, published on Monday this week. We on this Bench welcome the report. We congratulate the Foreign Secretary on launching the review and the Bishop of Truro on producing such a comprehensive report in such a short timeframe.

It is encouraging that several of the recommendations in the final report mirror those set out in the joint submission by the Church of England and the Catholic Bishops’ Conference of England and Wales. I am encouraged that the review has grounded its analysis and recommendations in a human rights framework, in a way that will benefit all those who suffer bias, discrimination, societal hostility or violence as a result of their religion or belief.

The Foreign and Commonwealth Office has made significant progress in recent years in the way that it addresses these matters, and should be congratulated on doing so, but this report and its recommendations set out areas where further steps can be taken to improve its focus and engagement and make the necessary step change. Bearing in mind the very helpful observations of the noble Baroness, Lady Berridge, I hope that subsequent steps will not get bogged down in endless debates on the definition of the phenomenon of Christian discrimination and persecution.

As the most reverend Primate the Archbishop of Canterbury and the Cardinal Archbishop of Westminster recognised in their letter to the review,

“our Christian sisters and brothers face persecution of an intensity and extent unprecedented in many centuries”.

We do not need a definition to know that this persecution is real and ongoing. Our focus now should be on how we arrive at interventions that can end this predicament. This will take time, but it also takes commitment.

In taking this forward, the Government should be assured that they will of course find a very willing partner not only in the Church of England and other Christian Churches but in other faith communities. I know from the work I do in east London with the leaders of those communities that we stand together in wanting to make progress on this, because these freedoms of religion and belief need cherishing and protecting. The societal benefits of this will be felt not just in those places where the terrible persecution of Christians and others is a daily reality but in east London, in this country and right across the world.

As some of your Lordships will know, this year is the 800th anniversary of one of the greatest events in Christian-Muslim dialogue. It happened during the Fifth Crusade, at the Siege of Damietta. St Francis of Assisi, with a single companion, crossed the battle-lines at terrible personal risk. He did this 800 years ago to seek out the godly and devout Sultan al-Malik al-Kamil, who was known for his tolerance of Christian minorities in Egypt. He did it for one purpose: to seek peace. He sought to build a different sort of world, one where we respect each other’s beliefs and work together for the greater good. I hope this debate and these reports will lead to the same determination. I nearly said “amen” at the end; that is how bishops end talks, so forgive me.​