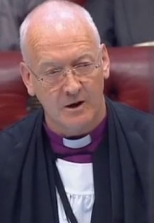 On 19th October 2019 Parliament sat on a Saturday for the first time in 37 years. The Lord Privy Seal (Baroness Evans of Bowes Park) moved a motion to take note of Brexit, and repeated the Prime Minister’s statement on the deal he had negotiated with the EU. The Bishop of Leeds, Rt Revd Nick Baines, commented about issues of trust and humility:

Lord Bishop of Leeds: My Lords, I have ditched the speech that I intended to give because of what I have heard. I particularly want to reinforce the speech of the noble and learned Lord, Lord Judge. His warnings are prescient, although his conclusion reminded me of that of the General Synod on writing liturgy. It was unanimous that there should be only one form of the Lord’s prayer in our new liturgies. Everyone agreed; we ended up with three.

The “how” is a very difficult question.

From what we heard in the Statement earlier, it seems that the question at the root of all of this stuff is trust. Trust cannot be commanded, even by a Prime Minister; it has to be earned.

We have had three years or more of either learning to trust or becoming suspicious about trust, and that goes across the country. We heard in the Statement that we have been half-hearted in our commitment to the EU. We have not just been half-hearted. We have been told lies and there has been gross misrepresentation, including from the current Prime Minister when he was a journalist in Brussels.

Propagated through the media, these lies have been allowed to go on and have formed the way that we see and understand Europe, ourselves and our role. That raises a question about trust.

We have been asked to reconcile competing instincts. Which ones? Do they include loyalty or integrity? It seems to me that our MPs and parliamentarians have been doing precisely what they are there to do in a parliamentary democracy. They are not delegates. They are there to use their judgment, with integrity, and to face the consequences of that at the ballot box. Of course, the consequences they face are usually through Twitter and other social media, where they and their families are threatened with violence or even death. Is this really acceptable? Is this what we have come to?

I have three questions about what we have learned from the last three years, because the question of trust is behind all the other issues that we are looking at. My three questions have to do with culture, language and character. The cultural question is: what has become of our political and public discourse, and our relationships with one another as we describe them in language and our behaviour towards one another?

Bishop of Leeds @nickbaines in yesterday's debate on Brexit in the House of Lords. pic.twitter.com/4GCFKK3poG

How will those go beyond today? What used to be called the conflict metaphor, in relation to science and faith, has gone beyond a metaphor in our political culture into a simple acceptance of divide and rule. It is all very well hearing now that we need to pull all the different parties and elements in both Houses together to find a way forward. Some of us were asking for that three years ago, two years ago and a year ago, and it was dismissed. ​It was a zero-sum game of winner takes all. Have we learned that the conflict metaphor, although effective, is actually disreputable?

On language, we have been subjected to repeated slogans and oversimplifications. We heard them again this morning but “Get Brexit done” is meaningless because we know that whatever happens today, Brexit will not be done. We will be on the starting blocks of Brexit. This was supposed to be the easy bit; well, I look forward to the difficult bit—or maybe not. This is not the end and we know that when we use this language, there are people in the populace beyond Westminster who believe it. We know, and I think we should learn, that slogans are more effective and powerful than reasoned fact or argument.

Briefly, on character, the UK’s global reputation is not exactly flying high as a result of Brexit. I will be in Hanover next week addressing parliamentarians, trying to explain Brexit and what has become of England—their question, not mine. I refer the House to Susan Neiman’s book, Learning from the Germans. What we learn from history is that we need humility instead of hubris. I await what that might look like in the culture of the future.

Baroness Armstrong of Hill Top (Lab): [extract] …I was very moved by the words of the right reverend Prelate the Bishop of Leeds. …

Lord Foulkes of Cumnock (Lab Co-op): [extract]…Secondly, as the right reverend Prelate the Bishop of Leeds rightly said, MPs are not delegates. …

Baroness Bennett of Manor Castle (GP): [extract] …The right reverend Prelate the Bishop of Leeds, my almost neighbour in Sheffield, said that we are just on the starting blocks of Brexit. …

Baroness Hayter of Kentish Town (Lab): [extract] My Lords, we may not have had the excitement of the vote at the other end, but this debate has showcased this House at its very best in the quality of the speeches and the sheer scope and depth of experience. We heard from a trade union leader; a filmmaker; a former Lord Chancellor; a former Lord Chief Justice; permanent secretaries; journalists; three Earls, two Viscounts and a Duke; a plethora of senior politicians, including half a dozen former Conservative Cabinet Ministers; notable leaders from entertainment, charities and business; and a Bishop, academics and lawyers. They know of what they speak. They have tentacles into these worlds and a real grasp of the demands and working of the myriad services, industries and enterprises that create the wealth and well-being of this country. …