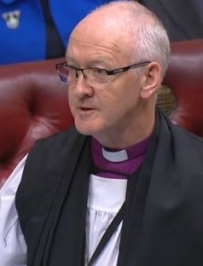 On 14th January 2020 Lord Oates (LD) moved Amendment 2 to the European Union (Withdrawal Agreement) Bill during its Committee Stage*. The Bishop of Leeds, Rt Revd Nick Baines, spoke in the debate on the amendment:

The Lord Bishop of Leeds: I thank the Minister for giving way. Does she agree that many of the 2.5 million people who have registered have done so resentfully and unhappily, because the process that they have been made to go through is effectively applying for a status that many of them have for decades felt that they should have had automatically?

Even though I accept that the system might be working successfully, and I applaud that, there are still some reassurances to be given—the soft power, if you like—to those, many of whom I know in my own diocese, who have applied with a great deal of resentment and unhappiness.

Baroness Williams of Trafford: My Lords, I have spoken to my noble friends beside me and I have not had any feedback on resentment. I have had feedback on the fact that we have made the scheme free, which was a noble thing for the previous Home Secretary and Prime Minister to do. The fact that so many people now have a status they can prove can be only a good thing.

We are processing 20,000 applications every day. We are working with communities—sometimes on a one-to-one basis because some people find the filling-in of any application process difficult.

* In introducing the amendment Lord Oates said: “…Amendment 2 seeks to create a declaratory registration system to replace the existing application-based system. Its intention is, first, to continue to provide incentives for registration but to avoid making EU citizens who do not register by the deadline immediately and by definition illegal.

Secondly, it seeks to ensure that EU citizens can receive physical proof of registration, which is a concern that I know has been expressed to many Members of your Lordships’ House, and indeed has been the subject of representations made by EU sub-committees.

Thirdly, it would consolidate in primary legislation both the current eligibility criteria of the EU settlement scheme Immigration Rules and the rights of those who are eligible under the scheme. …”