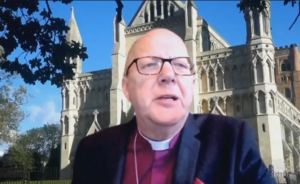 On 27th October 2020 the House of Lords considered the Government’s Social Security (Up-rating of Benefits) Bill in Committee. The Bishop of St Albans supported an amendment on reporting impacts on pensioner poverty:

“(2C) No draft order laid before Parliament under subsection (2A) may be made in the form of the draft unless the Secretary of State has laid before Parliament—(a) a report containing an assessment of the existing levels of pensioner poverty in each of the regions and nations of Great Britain, and(b) a statement outlining the expected impact of the draft order on pensioners with the lowest incomes.”

Member’s explanatory statement – This amendment would prevent a draft order under inserted subsection (2A) from being made unless the Secretary of State has published a report outlining current levels of pensioner poverty across the regions and nations of Great Britain and a statement outlining the expected impact of the Government’s chosen policy option on these poverty levels.

The Lord Bishop of St Albans [V]: My Lords, I will speak to Amendment 3, and thank the noble Baroness, Lady Sherlock, for her work on it. I have previously spoken about the importance of the Government fulfilling their promise to deliver the triple lock to pensioners, so I support the general thrust of the Bill. However, it is important that a considered approach to uprating is taken that analyses the benefits of this policy. After all, pensioners, like the rest of the population, represent a very diverse range of income levels.

Covid-19 has shaken the economic standing of much of the working population—a fate that pensioners have largely been shielded from. The taxation of future generations to pay for current pensions must be balanced with assessments that clearly outline the effectiveness of this policy. The reality is we do not have unlimited economic resources at our disposal, and trade-offs are required. I do see dangers in uprating the entire pensions scheme by 2.5%, without the necessary impact assessments, at a time when unemployment and working household debt are rising. Reviewing both the cost and relative success of this policy in determining not only whether it reduces existing levels of pensioner poverty but whether the relationship between pensioner and working household incomes throughout a given period might lend itself, in the future, to a much more targeted approach to uprating.​

I expect the report’s assessment of existing levels of pensioner poverty will be reflective in assessing the efficacy of blanket uprating policies and whether considered and targeted increase in social security and relief would better account for uncertainties such as the Covid-19 crisis, which has had a disproportionate economic effect on the working-age population. Of course, pensioners need to be adequately looked after. Until a review on whether the 2.5% minimum uprating delivers intergenerational fairness, it is right that the House approves these measures.

Finally, on intergenerational fairness, which was mentioned at Second Reading, I once again call on the Government to extend April’s universal credit increase and extend this lifeline that so many across the country are relying on.

Baroness Stedman-Scott (Con) [Minister]…The right reverend Prelate the Bishop of St Albans asked about an impact assessment. For pensioner incomes, assumptions would need to be made about how each individual pensioner’s income will change in the future, which would require making assumptions, as I have said, about many things, such as earnings for pensioners, change in the rate of return and drawdown of income. This is most difficult.

The noble Lord, Lord Addington, and the right reverend Prelate the Bishop of St Albans quite rightly raised a point about intergenerational fairness and questioned why we should keep the triple lock for pensioners when working-age people are only getting CPI increases. We have recently seen rises in the living standards of pensioners, but we must remember that not all pensioners are in the same position: over a million current pensioners rely solely on their state income. We must not forget that today’s working-age people are tomorrow’s pensioners, and future generations of pensioners will also benefit from the way the state pension is uprated today.​

Baroness Sherlock (Lab): I thank the right reverend Prelate the Bishop of St Albans for his continued advocacy for those on low incomes at all ages. I wholeheartedly endorse his call for the uplift on universal credit to be extended beyond April, and I ask that this also be extended to legacy benefits. Poor workers often become poor pensioners, so all we are doing at the moment is pushing the problem even further back.