On 18th November Baroness Boycott asked the Government, “further to the response by Lord Callanan on 20 October (HL Deb, col 1414), what plans they have for the campaigns taking place before COP 26 relating to behaviour change and the environment.” The Bishop of Salisbury asked a follow up question: 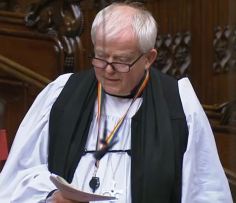 The Lord Bishop of Salisbury: My Lords, Ban Ki-moon, then General Secretary of the UN, said that the Paris climate change talks were the largest and most complex talks he had ever been part of. Some 12,000 people were in the discussions, with another nearly 50,000 gathered around them.

What steps are the Government taking to ratchet up the engagement of the faith communities and other NGOs around the climate change talks that will take place in Glasgow, and what steps are they taking to strengthen the diplomatic efforts to make the talks more successful?

Lord Callanan (Con): There is a huge diplomatic effort ongoing with all parts of the world to try to ensure the maximum success of those talks. I am sure that we will be very keen to involve faith communities and others in the run-up to the summit.