I want to draw attention briefly to a remarkable cultural development—the renewal of our cathedrals where, I hope and pray, the first female diocesan bishops will be enthroned – Bishop of Norwich, 11/6/14

On 11th June 2014, in the eighth contribution to the debate on the Queen’s Speech from the Lords Spiritual, the Bishop of Norwich, Rt Rev Graham James, focused on constitutional and heritage issues. The Bishop spoke of his hope that female bishops would soon be able to join the Bench of Bishops in the House of Lords, and highlighted the cultural and economic impact of cathedrals in the life of the country. 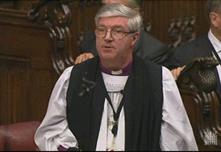 The Lord Bishop of Norwich: My Lords, the Scottish referendum means that we face constitutional change, or the possibility of it, on a massive scale. I recall someone remarking that constitutional change in Britain is a bit like unpicking a ball of wool—once it unravels, it is hard to stop without creating a knotty mess. That is neither an argument against constitutional change nor against knitting but it does call for a good pattern to follow.
While it may not rate as constitutional change, many of us on these Benches hope that at the General Synod next month we will finally approve the legislation to enable women to be consecrated as bishops. Unlike the break-up of the United Kingdom which needs only a simple majority vote in one nation, the Church of England requires majorities of two-thirds across the board—bishops, clergy and laity—to achieve such a change. Sixty years ago it would have been unthinkable, but when I was born your Lordships’ House contained only males and only hereditary Peers.

Constitutional change, the creation of life Peers and the introduction of women to our Chamber has both reflected and shaped wider cultural change, and the reputation of your Lordships’ House has been enhanced.

Noble Lords will be aware that a diocesan bishop is often in post for four, five or even six years before being introduced here, so these Benches could continue to be all male for some years after the first women are consecrated. Some of us hope that, in consultation with the Government and the usual channels, a way may be found to break the cycle a little and create a faster track for the first female diocesan bishops. It needs sensitive handling. The first women bishops will undergo much media scrutiny and attention so we do not want to make the pressures on them unbearable, but we hope that this modest reform may be permissible without inviting every other good or bad idea about Lords reform to be attached to it.

In the light of changes in the composition of your Lordships’ House, I hope that the quicker arrival of women bishops may be welcomed in the closing speeches today.

Culture is the Cinderella subject in today’s debate but I want to draw attention briefly to a remarkable cultural development—the renewal of our cathedrals where, I hope and pray, the first female diocesan bishops will be enthroned. It was their community value which led the Chancellor to allocate £20 million for outstanding cathedral repairs in the last Budget.

Cathedral congregations have grown, some remarkably, but the contribution of cathedrals to economic regeneration and social cohesion is often underplayed. The 42 cathedrals of the Church of England—I can speak only for them—receive as many visitors in a year as all English Heritage’s 420 properties combined. That is not to do down English Heritage’s remarkable collection; it simply demonstrates the enormous attraction of cathedrals.

One in six British adults will visit a cathedral this year, which is more than will attend football matches, even including those committed enough to travel to Brazil. Those 42 cathedrals employ around 6,000 people. Recent calculations on their economic impact suggest returns of at least £91 million per annum, rising to more than £150 million, including incidental spend.

Cathedrals create community. Cathedral quarters, such as the one in Blackburn, are being created to bring social regeneration to the city. In Chester, a partnership between the cathedral and the police has proved a good way of managing anti-social behaviour by creating a safe as well as beautiful space at the heart of the city. Next week in Norwich, I will host the annual Bishop’s Art Prize exhibition for students of the Norwich University of the Arts. They are given a theme capable of wide interpretation and discover that the church is still a significant sponsor of new art. Canterbury and Winchester have art by Antony Gormley, and St Paul’s has just installed the first permanent moving-image artwork within any cathedral: Bill Viola’s “Martyrs”. Our cathedrals are treasure houses of contemporary art.

Culture is also about people. Our cathedrals are now ablaze with candles lit by people who come to pray in need and distress. They could not operate without an army of volunteers. We have more than 600 in Norwich, and there are more than 800 in Canterbury. At Manchester Cathedral, a scheme of volunteering aimed at the long-term unemployed has had an incredible success rate in getting people back to work.

There may have been no proposed legislation specifically aimed at culture in the gracious Speech, except that all we do has a bearing on it. It is about the way we live our lives, and the walls separating faith and worship from art and economics or from social inclusion and heritage turn out to be very thin indeed and could do with being removed altogether.