On 26th April 2018 the House of Lords debated the Bat Habitats Regulation Bill, a Private Member’s Bill introduced by Lord Cormack. The Bishop of Norwich, Rt Revd Graham James, spoke in favour of the Bill, explaining why bat roosts continued to be such a problem for medieval churches.

The Lord Bishop of Norwich: My Lords, we are indebted to the noble Lord, Lord Cormack, for the Bill. He has pursued a subject which I think can too easily be treated with mirth, but is not at all funny for those congregations in churches where bats sometimes rule the roost. It is reckoned that about 60% of all 16th-century or earlier churches have bat roosts. It is as significant as that. It is the nature of access to the roofs of medieval churches, I think, which causes the bats to go there, rather than their appreciation of our great, historic heritage. In a diocese such as mine, with 640 churches, of which 550 are medieval, there are places where the bat population outnumbers not simply the congregation but our total number of parishioners.

I used to recommend the regular use of incense, partly because I am very high church and love incense, and bats appear to be very Protestant, as they normally departed where incense was used. But even that is not now guaranteed to do the trick. Clearly, bats have gone up the candle in their churchmanship.

END_OF_DOCUMENT_TOKEN_TO_BE_REPLACED

On 26th April 2018 the House of Lords heard the repeat of a Government answer to an urgent question on immigration removal targets. The Bishop of Norwich Rt Revd Graham James, asked a follow up question:

The Lord Bishop of Norwich: My Lords, yesterday there was a meeting here in Westminster of parliamentarians and representatives of the Church of England and of the black majority churches about the ongoing problems of the Windrush generation, some of which have been made more acute by the controversy over removal targets. END_OF_DOCUMENT_TOKEN_TO_BE_REPLACED

On 25th April 2018 the House of Lords considered amendments to the EU (Withdrawal) Bill at its Report Stage. A vote took place on an amendment to the Bill, on ‘Henry VIII’ powers of Government, in which three bishops took part:  END_OF_DOCUMENT_TOKEN_TO_BE_REPLACED

On 24th April Lord Hylton asked Her Majesty’s Government “what proposals they have for processes by which Israel might be held accountable for its treatment of the inhabitants of Gaza.” The Bishop of Norwich, the Rt Revd Graham James, asked a supplementary question:

The Lord Bishop of Norwich: My Lords, can the Minister say whether the Government support the UN Secretary-General’s call for an independent investigation into the recent bloodshed in Gaza? END_OF_DOCUMENT_TOKEN_TO_BE_REPLACED

On 23rd April Lord Lennie asked Her Majesty’s Government “what progress they have made on the appointment of the new Chair and members of the Social Mobility Commission.” The Bishop of Norwich, the Rt Revd Graham James, asked a supplementary question:

The Lord Bishop of Norwich: My Lords, greater social mobility was one of the drivers of the original academies programme set up by the last Labour Government, which was why some of us supported it so strongly. Does the Minister believe that that still holds true for academies now and that widening educational opportunities for the disadvantaged is the key factor in promoting social mobility?

END_OF_DOCUMENT_TOKEN_TO_BE_REPLACED 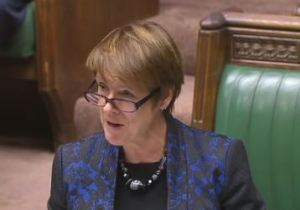 On 19th December the Second Church Estates Commissioner, the Rt Hon Dame Caroline Spelman MP asked a question to Health ministers about the new Paterson Inquiry led by the Bishop of Norwich

Dame Caroline Spelman (Meriden) (Con): I would like to thank the Minister for listening very sensitively to the victims of Paterson, the rogue surgeon, many of whom are constituents of mine. Does he agree that the evidence from the Hillsborough inquiry is that a bishop-led inquiry can indeed get justice and closure for victims? Will he join me in wishing the Bishop of Norwich great success in getting a good outcome from this inquiry? END_OF_DOCUMENT_TOKEN_TO_BE_REPLACED

The following letter, in support of Baroness Hamwee’s Refugees (Family Reunion) Bill signed by eight bishops, seven of whom are Lords Spiritual, appeared in The Times newspaper on 15th December 2017.

Sir, Britain is one of the few countries in Europe that does not allow refugee children who arrive alone in the UK to bring a parent here. This is the most glaring example of overly restrictive rules that deny many refugees the chance to live with their family. Today Baroness Hamwee will sponsor the Refugee Families Reunion Bill in the House of Lords, which would allow a wider range of family members to be reunited with refugees living in the UK. END_OF_DOCUMENT_TOKEN_TO_BE_REPLACED

On 17th October 2017 Baroness Warsi asked Her Majesty’s Government “whether they have a definition of Islamophobia; and, if so, what it is.” The Bishop of Norwich, Rt Revd Graham James, asked a follow up question:

The Lord Bishop of Norwich: My Lords, does the Minister agree that, whatever our definition of Islamophobia, one of the most effective ways of preventing it is by good relationships between the different faith communities, exemplified by the new church/mosque twinning programme promoted by the Christian Muslim Forum? That is already established in Oldham, Rochdale, Walsall and Wolverhampton. What can the Government do to encourage those local community initiatives, which can transform the way in which a local community views Muslims in their midst? END_OF_DOCUMENT_TOKEN_TO_BE_REPLACED

On 16th October 2017 Lord Dubs asked Her Majesty’s Government “what is their estimate of the number of people currently in hospital waiting to be discharged to care homes when places become available.” The Bishop of Norwich, Rt Revd Graham James, asked a follow up question:

The Lord Bishop of Norwich: My Lords, since the difficulties of hospital patients awaiting discharge to care homes is but one of a number of bottlenecks in the present system, does that not suggest that we need a fully integrated national health and social care service and that, until we achieve such integration, these problems are bound to recur—as the National Audit Office report in February this year so clearly and vividly illustrated? END_OF_DOCUMENT_TOKEN_TO_BE_REPLACED

On 11th October 2017 the House of Lords voted on an amendment to the Government’s Armed Forces (Flexible Working) Bill [HL]. Two bishops took part in the vote. END_OF_DOCUMENT_TOKEN_TO_BE_REPLACED