On 18th July the House of Lords considered the Government’s Policing and Crime Bill at its Second Reading. The Bishop of Southwark, Rt Revd Christopher Chessun, spoke in the debate, focusing on proposals for police reform, gambling, mental health and young people. 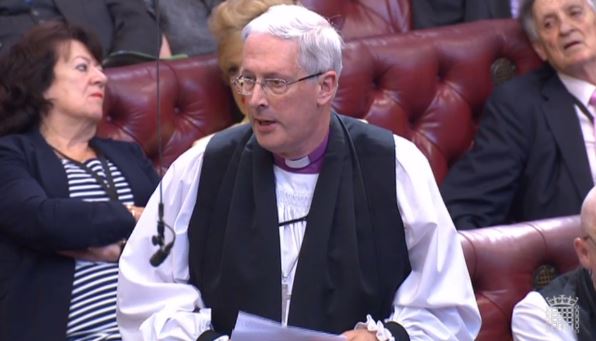 The Lord Bishop of Southwark: My Lords, I congratulate Ministers and their officials on bringing forward such a large Bill in so orderly a fashion. This is a Bill of nine parts; even Gaul was only divided into three. I hope your Lordships will forgive me if I make a number of points from so varied a terrain.

While the Bill addresses licensed premises for the sale of alcohol, we have no mention in it of other licensed premises, which are also vulnerable to criminal activity. We know from freedom of information requests reported in the press that from 2013 to 2014 there was a 20% rise in the number of police call-outs to betting shops. The right reverend Prelate the Bishop of St Albans, who wished to attend this debate, himself submitted a freedom of information request recently to the Gambling Commission, which reveals a 68% rise in reports of violence against the person at London betting shops over the last five years.

Much of that rise has been linked to the increase in the number of fixed-odds betting terminals, which now account for more than half the profits of high-street bookmakers. Local licensing authorities remain unable to impose conditions on the use of these machines. The right reverend Prelate the Bishop of St Albans has asked me to indicate to the House his intention to bring forward amendments in Committee to rectify this anomaly, and he is hopeful of a sympathetic response.

Noble Lords will be aware of concerns raised by the mental health charity Mind about provisions in this Bill, but I am sure your Lordships will join me in applauding Her Majesty’s Government for the very real progress we find in these provisions—if sensitively implemented—regarding the maximum time that cells may be used, the use of a person’s home as a safe space and the exclusion of 16 to 17 year-olds from cells. A statement on a step change in provision from the Department of Health and local authorities where there is no complementary provision would be welcome during the Bill’s passage.

I hope that Ministers will look favourably on proposals emanating from the Children’s Society, the NSPCC and Barnardo’s for an extension in the use of child abduction warning notices to cover vulnerable 16 and 17 year-olds more widely than the very small group to which they currently apply. The Minister may be aware that the organisations concerned are also pressing for all victims of child sexual exploitation and abuse to receive an automatic referral to their local child and adolescent mental health service when they disclose their abuse. It would be helpful to know whether the Government will consider addressing these points during the passage of the Bill.

On quite another point, Part 3 and Chapter 1 of the Bill introduce very important changes for both the rank structure of the police service and the exercise of policing powers towards the population at large. Neither the Explanatory Notes nor the College of Policing review on leadership, which the notes reference, mention the previous wide-ranging review by Sir Patrick Sheehy in 1993, commissioned by the then Home Secretary, now the noble Lord, Lord Howard of Lympne. It recommended a flatter rank structure for the same reasons as stated now. The ranks of deputy chief constable and chief superintendent were abolished from the beginning of 1995, only to be reintroduced in 2002 as the police service was found unable to manage effectively without them. It will be important not to repeat this error. Do the Government intend to extend provisions in the Bill to the British Transport Police and other non-Home Office forces?

On the provision to specify only a set of core policing powers for police officers and to allow chief officers of police to designate other policing powers at their discretion for policing staff and volunteers, I have some concerns. I myself am an officeholder, as, for example, are all my parish clergy; none of us is an employee. The point about being an officeholder seems to have been lost in drawing up these provisions. When Sir Robert Peel brought in major reforms for the policing of Ireland and of London, he none the less applied the ancient office of constable as a key component in the delivery of this new form of policing. For that reason, Section 10 of the Police Act 1996 gives chief constables a power of direction and control over those officers. It is this office, paid or unpaid—hence special constables—that distinguishes them from staff. The bald provisions as they lie in this Bill blur that distinction without, it seems, realising it. The College of Policing review noted a number of contributors questioning the ongoing relevance of the office of constable in such a scheme. It is indeed an argument worth considering, but in that case we should consider it in depth, not ignore it. Mere affirmation is not sufficient.

The value of the reforms of the Police Reform Act 2002—most notably the introduction of police community support officers, which have been a particular blessing on the streets of my diocese—and the later allocation of a core standard set of powers to them, was that they preserved a distinction from police officers. With standard powers, one gets some idea of what a PCSO is meant to do. If all staff and volunteers, for whom issues of accountability and regulation must necessarily arise, will have a range of powers at the discretion of chief officers, who themselves will change every four years or less, what hope is there for public consent and understanding of what these professionals will do? Indeed, I am left wondering what will happen to PCSOs, and neighbourhood policing with them, under these new arrangements. I trust that these points are of some use.

Baroness Harris of Richmond (LD) [extract]:  I also ask, as did the right reverend Prelate the Bishop of Southwark, who is not in his place, why the rank of superintendent should not be prescribed in legislation. After all, superintendents perform difficult and serious management roles and need to be recognised.

Lord Keen of Elie (Minister) [extract]: The noble Lord, Lord Rosser, also raised the question of mental health provision, as did several other noble Lords, including the right reverend Prelate the Bishop of Southwark, the noble Baroness, Lady Howe, and the noble Lord, Lord Harris. To put this into context, of course a police cell is not considered a suitable place of safety. That is the impetus behind the Bill. It is only in exceptional cases with respect to adults that it would ever be contemplated. The noble Lord, Lord Harris, talked about guarantees. You cannot have guarantees at this stage. You can have provision. The Government have announced additional funding for the NHS of up to £15 million to invest in additional health-based places of safety; that provision will be available. In addition, the Bill increases the flexibility for local areas and clinical commissioning groups to explore innovative options to create additional places of safety to try to ensure that police cells are resorted to in only the most exceptional cases.