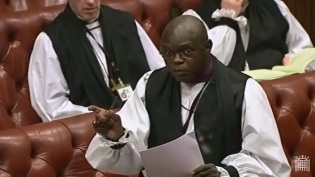 On 28th June, the Archbishop of York, the Most Revd and Rt Hon John Sentamu contributed to the ongoing debate on the Queen’s Speech. The Archbishop’s speech addressed Brexit and he called for cross-party work to secure a Brexit that serves the common good.

The Archbishop of York My Lords, I have followed with interest the debates on the Queen’s Speech over the past week. I have been encouraged to hear assurances from the Leader of your Lordships’ House and various Ministers of the Government who seek to govern with humility and to forge cross-party agreement where they can. That is as it should be, regardless of the numerical strength or weakness of the Government.

Many issues raised in the Queen’s Speech and the Government’s agenda give us the best opportunity to have that wider consensus. No area is more important than that when it comes to negotiating Britain’s departure from the European Union and to forging a new relationship—a deep and special partnership—with the EU. Indeed, the reality is that there is no way in which a minority Government can hope to get all their ​legislation relating to Britain leaving the EU through Parliament without the help of others. The Government need to make a virtue out of that necessity.

The challenge now is to negotiate a Brexit for the common good. How do we make Britain’s departure from the EU a good news story for the poor, the unemployed and those whose wages and living standards have been falling? That is no easy task. The Government’s most recent poverty figures showed that 14 million people live in poverty in the UK. Numbers started to rise last year, and research published by the Joseph Rowntree Trust projects that by 2020-21 there will be over 1 million more children in poverty than there are now.

The real incomes of the poorest tenth are set to be lower in 2020 than they are today, while those in the middle and at the top will see their incomes rise. With inflation rising, earnings growth weak and many tax credits and benefits frozen, life is set to get harder for those at the bottom over the next few years. It was therefore welcome news in the Queen’s Speech that the Government have promised to increase the national living wage,

“so that people who are on the lowest pay benefit from the same improvements in earnings as higher paid workers”.

My hope is that the increase will be up to what the Living Wage Commission, which I chaired, recommended. Playing catch-up is not good enough. I hope that the Government will take what was recommended. Many FT index companies are already paying that amount of the living wage.

Some hold that leaving the EU will only impoverish existing marginal and vulnerable communities further. These voices need to be heard rather than silenced. They need to be drawn into the debate as to the type of economic model that we need to encourage human flourishing post-Brexit and how that understanding should shape the Government’s negotiating strategy to leave the EU. Only by doing so will we be able to bridge the deep divisions exposed by the vote to leave the EU and the recent general election. It is evident that within government we need a more collegiate and consensual approach.

Beyond government, in the latter’s dealing with Parliament, the media and the electorate, the approach needs to be more transparent and more broadly based. Conducting the negotiations in a positive and constructive tone requires the Government to ditch once and for all the confrontational and threatening language that they have used since the referendum. Fiery slogans such as “No deal is better than a bad deal” might play well with Eurosceptics, but they do little to build the partnership between the UK and the EU that the Government have always said is their fundamental objective. “No deal is better than a bad deal”. Does that mean, for example, that we will cut all our diplomatic ties with the 27 remaining EU countries if we get a bad deal? Is that what it means?

To deliver the objective of partnership, the Government need to abandon fights over issues that are either marginal or where the UK has no hope at all of winning the argument. The dispute over the sequencing of the negotiations is a case in point. When the row of the summer becomes the row-back of the summer, ​the Government lose face and political capital. Disputes like this merely illustrate that the Government still need to understand the processes of Article 50. But all is not lost. It was encouraging to see the Prime Minister’s statement of 25 June that she wanted,

“all those EU citizens who are in the UK, who’ve made their lives and homes in our country, to know that no one will have to leave. We won’t be seeing families split apart. People will be able to go on their living their lives as before”.

The proposals are a good start, but this is one of the thorniest issues to be resolved in the negotiations and the devil will be in the detail. I therefore humbly encourage the Government to take a broad and opened-minded attitude to this matter. The simplest solution would be to codify clearly and comprehensively the rights of EU citizens in British law and to take March 2019 as the cut-off period. Going forward, the motivation of both sides should be good will, justice, compassion and the rule of law.

What would help the Brexit negotiations more than anything else is a greater degree of realism. I have every confidence that the Government will reach agreement within the timescale set by Article 50, but we need to recalibrate expectations that a new relationship with the EU can be negotiated by March 2019. Most experts hold that it is unlikely to be completed and ratified this side of 2025. This is where we need a cross-party commission, maybe even a royal commission akin to the Privy Council, to look creatively at the possible options and to offer impartial but honest advice to the Government on the best transitionary and final arrangements. Its size should not be too large. As Queen Elizabeth I said in her speech on her accession to the throne:

“a multitude doth make rather disorder and confusion than good counsel”.

She shrank her Privy Council from 30 to 10. I am certainly not looking for a place on such a body, but I suggest that keeping the UK in the single market and the customs union until the end of the transitional period when any new relationship with the EU comes into force may help us. I recognise that this is not unproblematic, but looking to use membership of the EEA, as the noble and learned Lord has just suggested, could be a stepping stone to a still unknown destination and would give both sides not a cliff hanger but a gentler slope.

The outcome of the general election offers the United Kingdom and Northern Ireland an opportunity for a fresh start, not to turn our backs on leaving the EU but rather to learn the lessons of the last year and deliver and manage our leaving the EU in a way that provides for the long-term flourishing of this country.