On 22nd March 2018 Baroness Lister of Burtersett asked Her Majesty’s Government “what plans they have to support survivors of domestic abuse and to prevent future abuse.” The Bishop of Derby, Rt Revd Alastair Redfern, spoke in the debate: 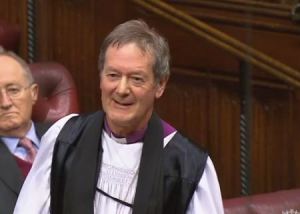 The Lord Bishop of Derby: My Lords, I, too, thank the noble Baroness, Lady Lister, for introducing this important debate. It is crucial that we hold together support for victims and prevention. To get value for our investment we need to push back against the space that allows this crime to happen. I want to offer one or two thoughts about the framework within which resources need to be spent, and about the challenge to the Minister and to local authorities in the complexities that we are trying to deal with. The smaller the budget, the greater the odds against anything working.

Domus—home—is to many people a sacred space where they find their security and identity, and from which they negotiate into the world. That was probably a Victorian creation. The reality is that that private space has often been a space for rules to be made up and power to be exercised in an abusive way. That is a deep reality.

One of the big-picture things we have to consider is how, when we have public values and standards, we enable people to recognise that those should apply in private spaces, and that they should not feel free to run their own circus and make up their own set of rules—often short-tempered and fuelled by drink, drugs or whatever else. Somehow we have to connect the public expectations we can all sign up for, and which many people who get caught up in domestic abuse would sign up for, with the private space in which people sometimes feel free to behave in an abusive way.

The work of refuges is invaluable, and in particular the specialist care—but the point about funding made by the noble Baroness, Lady Lister, leads to the fact that a refuge is often a stepping stone in a whole process of destabilisation for people. Enormous resources and skills are therefore needed, not just around the refuge but around continuing care and continuing resourcing, for people to become stable and stand on their own feet.

The notion of partnership is crucial. If we are to invest in local authorities having a lead role, there must be an expectation and commitment that those authorities work in partnership with Women’s Aid and other experts on the ground, so that funding is deployed most effectively and the needs and voices of the victims are heard and help us shape the investment. ​It is the partnerships that allow that connectivity from the professionals and agencies into where the money needs to be deployed.

I will give some headlines from Derbyshire County Council—I work in Derbyshire—about what it is trying to do in this area. The council says that it has made no cuts at the moment, so that is a small sign of hope. The basic problem of victims not knowing where to turn was met by establishing a dedicated team and a phone line. In three months there were 12,000 calls. This is in just one county. The demand is enormous. As we said, there is a hidden demand below those who have the courage to pick up the phone. But it is complicated. In urban areas such as Chesterfield there are drop-in centres, and in rural areas one has to rely on GPs or other public officials. Resourcing all of those people is a massive challenge. There is a male-only refuge in Derbyshire, mainly for victims of arranged marriages. We must remember that, although this is a gendered issue, there is an underside of male victims.

We are trying to push back. In the High Peak area there is a programme in schools to try to identify vulnerable and potential victims. The Minister might like to think about the enormous investment that we make in education for 10 years of character formation for people. As the noble Baroness, Lady Newlove, said, with this 2019 plan, how can we ensure that it is not just some gentle stuff about the perfect relationships that created the Victorian idea of the home? It is about the reality of people losing their tempers and drinking too much—all the kinds of things that fuel this. That is a huge challenge for government and educational authorities.

We in Derbyshire also run a voluntary scheme for perpetrators. It is right to challenge people’s criminal behaviour, but we have to look at the possibility of what I call reformation of character and reach out, as we do to victims, to those perpetrators. Again, that is a huge area of expertise that requires investment. We must not neglect the importance of trying to help people who are perpetrators to climb out of that cycle that they so easily get into.

I have a number of strands that the Minister might like to comment on. How can we deploy funds to give priority to partnerships around local authorities that involve victim input so that we can get value for money? Secondly, how can we make sure that education about relationships can be 10 years of formation about the realities and challenges of relationships, which are tough for all of us, and not just some academic enterprise? Thirdly, how can we make sure that we reach out to those who are properly criminalised when love and power go wrong and seek ways of reformation and reconnection often into families, through connection with children and into society?

The Minister of State, Home Office (Baroness Williams of Trafford) (Con).. As my noble friends Lady Newlove and Lady Bertin, and the right reverend Prelate the Bishop of Derby, said, we want to act early to equip all young people to have healthy and respectful relationships by helping all schools deliver high-quality relationships education, sex education and PSHE. We want to promote awareness and an improved response across statutory agencies, employers and communities as a whole, so that domestic abuse is rightly recognised as not the victim’s business but everybody’s business.