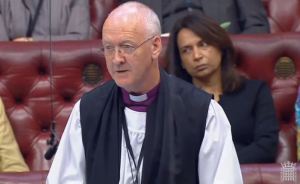 On 5th September 2015 a Government statement on the nerve agent attack in Salisbury was repeated in the House of Lords. The Bishop of Leeds, Rt Revd Nick Baines, asked a follow up question:

The Lord Bishop of Leeds: My Lords, will the Minister be able to comment on a question that hangs over all this—why the Skripals and why now? It is a matter of timing. Can a statement be made on that at some point because clearly there is a story behind it? My main concern is that we have heard this afternoon that a nerve agent—a chemical weapon—was brought through a civilian airport. I cannot even get a tube of toothpaste through, yet they managed to bring this through and then leave it behind rather indiscriminately, if that is what happened. What are the implications for airport security?

​Baroness Evans of Bowes Park: I can assure the right reverend Prelate that the Home Office has increased checks on private flights and freight arriving in the UK under existing powers, but because of the national security dimensions I am afraid I cannot comment on specific cases. He is right that the two individuals held valid Russian passports under identities that we now know to be false, and they were able to obtain UK visas using official Russian documents. We have taken further measures in this area including, for instance, introducing a new power to detain people at the UK border to determine whether they are engaged in hostile state activity. Obviously this is an area where the Home Office will continue to be vigilant. We will take further steps if they prove necessary.