On 21st May 2019 Baroness Janke asked the Government “what steps they are taking to address the concerns raised by teachers in, and the findings of, the survey on child poverty published by the National Education Union on 14 April.” The Bishop of Winchester, Rt Revd Tim Dakin, asked a follow-up question: 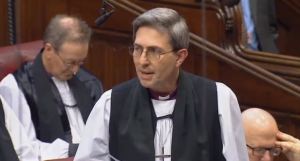 The Lord Bishop of Winchester: My Lords, in a recent poll of teachers in England, 46% reported that holiday hunger had increased over the last three years. In my diocese, in Southampton alone 37% of children—many of whom are in working families—are living in relative poverty; that is, below the 60% median income line. Despite what she has already said, can the Minister give assurances that the Government will commit to reviewing their policies to reverse the rise in child poverty?

Baroness Buscombe: My Lords, the right reverend Prelate referenced holidays, which is a really important issue because children are outside school protection. In 2018 the Government announced a programme of work to explore how best to ensure that disadvantaged young people can access healthy food and enriching activities over the school holidays. This included awarding contracts to seven organisations to deliver free healthy food and activities to children and families in some of the most disadvantaged areas during the 2018 holidays. This year the funding will be more than quadrupled, and we want to strengthen the programme to encourage co-ordination in local communities so that even more disadvantaged children can benefit from high-quality provision during the summer holidays.