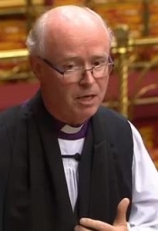 On 9th January 2020, Baroness Massey of Darwen asked the Government, “following their ratification of the UN Convention on the Rights of the Child, what plans they have to promote children’s rights and well-being across government departments in this Parliament”. The Bishop of Rochester, Rt Revd James Langstaff, asked a follow-up question:

The Lord Bishop of Rochester: My Lords, I have two particular groups of children in mind whose well-being is often compromised. The first are those who have a parent or other primary carer on the cusp of going into custody. What plans do Her Majesty’s Government have to ensure that sentencers, including magistrates, are aware of the new guidance from the Sentencing Council on this matter? On looked-after children, what intentions do Her Majesty’s Government have to further promote the vocation—it is a vocation—to become a foster carer or an adopter?

Lord Agnew of Oulton: On the right reverend Prelate’s first question, I will certainly check with officials that the justice system is aware of the provisions that he refers to. Looked-after children is an issue of increasing ​priority for the Government, as was mentioned in our recent manifesto, and I completely agree that they are one of the most vulnerable groups in our society. One of the initiatives that I have encouraged, for example, is the far greater use of local authorities teaming up with boarding schools which offer 40% bursaries to encourage some of these vulnerable children to join their institutions. We have seen evidence of a dramatic improvement in the life chances of those children.