On 25th November Baroness Miller of Chilthorne Domer asked the Government “further to the ratification by 50 countries of the United Nations Treaty on the Prohibition of Nuclear Weapons, what plans they have to review their policies towards nuclear weapons.” The Bishop of St Albans asked a further question: 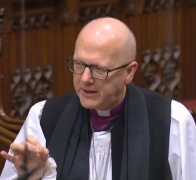 The Lord Bishop of St Albans: My Lords, recently I and a number of other Bishops issued a public letter welcoming the important ratification of the UN Treaty on the Prohibition of Nuclear Weapons. Can the Minister comment on the moral inconsistency, whereby we have rightly taken a stand on outlawing cluster bombs and landmines but not outlawing nuclear weapons, which, as we know, are far more destructive when they are used?

Baroness Goldie (Con): At the heart of the question asked by the right reverend Prelate is the relevance of the term “deterrent”. Very often people measure the deterrent a failure because it has not been used. I would argue the exact opposite—that the measure of a deterrent’s success is that it has not been used, because it is doing its job of deterring.