On 11th December, two bishops took part in a division on the Government’s Energy Bill, during ‘ping pong’ between the House of Lords and House of Commons.

END_OF_DOCUMENT_TOKEN_TO_BE_REPLACED

On 19th November 2013, the Bishop of Chester, the Rt Revd Peter Forster, took part in the Report Stage of the Government’s Energy Bill. He spoke in support of a Government amendment regarding the power to modify energy supply licences in domestic supply contracts. The amendment was agreed to. 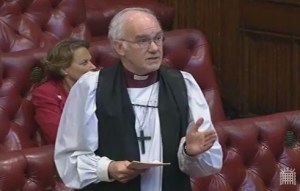 The Lord Bishop of Chester: My Lords, I welcome this amendment, which began its life, I think, in an interchange between the noble Baroness and me in Grand Committee. She has pretty much supplied everything that I asked for then, and I am very pleased. The only point that I will make now is that the Government rightly want to make it easy for consumers to switch suppliers. That is a good thing and it is very helpful that this information will be made available one way or another on bills. However, it needs to be made available consistently, in the same form, by different suppliers, so that if you are comparing a bill from one supplier with a bill from another, the information is supplied in the same form on each bill. The noble Baroness did not quite make that point in what she said. I hope that she can assure us that these costs will be disclosed—either voluntarily or by the exercise of the power that she is taking—not only transparently but consistently and comparably by different suppliers. END_OF_DOCUMENT_TOKEN_TO_BE_REPLACED

On 4th November 2013, the Bishop of Lichfield, the Rt Revd Jonathan Gledhill, took part in a division during the Report Stage of the Government’s Energy Bill.

On 28th October 2013, the Bishop of London, the Rt Revd and Rt Hon Richard Chartres, took part in the Report Stage debate of the Government’s Energy Bill. He tabled an amendment to the Bill, which sought to require the Secretary of State to publish a strategy setting out cost-effective policies to achieve a reduction
in demand for electricity, including specific targets for reductions to be made by 2020 and 2030. Following the debate on the Amendment, the Bishop did not move it to a vote.

The Lord Bishop of London: My Lords, biblical studies teach me that when you have two amendments that look as much alike as my amendment and that of the noble Lord, Lord Grantchester, you must look for an Ur-text. Indeed, there is an Ur-text, as we all know, and the figures in my amendment are simply the latest figures available from the Government. This is intended to be a constructive and supportive amendment, which also reflects the concern mentioned by the noble Lord, Lord Roper, about the sole emphasis on the capacity market not really catching the full subject here.

According to the Secretary of State in his own foreword to the response to the consultation, which was published in May of this year, a 9% reduction in overall demand could save electricity equivalent to the output of four power stations in one year. I do not want to pose as an expert, of which there are many in this House, but I have been trying in my own diocese of London to improve energy efficiency. I have taken a keen personal interest in the various efforts and our churches have actually achieved a 22% saving in energy consumption between 2005 and 2011. END_OF_DOCUMENT_TOKEN_TO_BE_REPLACED

On 28th October 2013, two bishops took part in a division on the Government’s Energy Bill, during its Report Stage.

Crossbench Peer Lord Oxburgh moved amendment 1, which would require the government to set out its decarbonisation strategy in 2014, establishing milestones up to 2030.

On 30th July 2013, the Bishop of Chester, the Rt Revd Peter Forster, took part in the Committee Stage debate of the Government’s Energy Bill. He spoke in support of an amendment to the Bill tabled by Lord Cameron (moved by Lord Roper), which related to the regulation of domestic microhydro power. Following the debate on the amendment, it was wirthdawn by Lord Roper.

The Lord Bishop of Chester: My Lords, I very much support the amendment. This may well be the last time I speak in this Committee and I thank the Minister for the way in which she has conducted herself and for writing to me with answers to some previous questions that I raised.

In addition to the reasons which have been so clearly enunciated, I would like to inject into the discussion the issue of culture, because much of what we are about in energy policy in this country is working on a change of culture. It has become a fashionable word. The Second Reading of the Financial Services Bill was all about changing the culture of banking and financial services, and that is absolutely right. However, the same applies in the energy realm. The sort of installations that we are talking about are relatively small in themselves but speak more widely. END_OF_DOCUMENT_TOKEN_TO_BE_REPLACED

On 23rd July 2013, the Bishop of Chester, the Rt Revd Peter Forster, spoke during the Committee Stage of the Government’s Energy Bill. He spoke during a debate on an amendment to develop the interconnectedness of European energy and electricity markets, focussing his remarks on the question of energy security.

The Lord Bishop of Chester: My Lords, when I am in a really tedious meeting I sometimes flick to my iPhone if I succumb to the temptation. The Energywatch organisation has a splendid app which tells you exactly what electricity generation is going on at any particular moment. I can tell your Lordships that at this moment we are depending upon supplies from overseas of 7%, or 3 gigawatts. Wind is producing at the moment less than one sixth of that. Over time, I am struck by just what a significant proportion of our electricity already comes in that way. Three gigawatts is not nothing; it is a very significant amount.

When the Minister responds, it would be helpful to give some indication as to what security there is. I belong to those who have some anxieties that in three or four years’ time, if economic activity picks up and some outages occur at a couple of big stations that we are not expecting, and if the weather is very cold and the wind is not blowing, we are going to depend upon electricity coming from these interconnectors. We can depend on it only if we know that they will be available. If the weather is also inadvertent in other countries, what security do we have that the electricity will be available from other places? I am entirely with the view that we should have a European electricity market. That is absolutely right but it has to be with certain guarantees for supply in this country, especially when supply gets tight in a few years’ time. END_OF_DOCUMENT_TOKEN_TO_BE_REPLACED