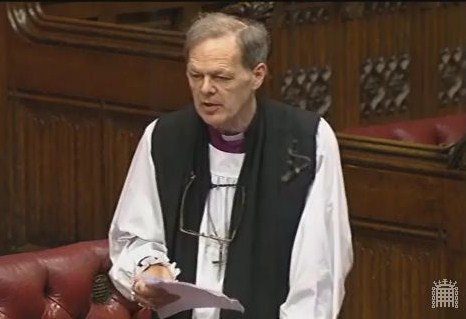 On the 9th May 2013 the Bishop of Lichfield, the Rt Revd Jonathan Gledhill spoke in the debate responding to the Queen’s Speech. Bishop Jonathan addressed the areas of immigration and asylum reform along with a range of other areas relating to his interests in Home Affairs. Concluding his remarks the bishop reminded the House of the importance of ensuring a unified society, adopting polices which do not disproportionately impact those least able to make choices for themselves.

The Lord Bishop of Lichfield: My Lords, the gracious Speech bears out the Government’s intention to work towards an orderly society in which a fair and transparent system of justice supports the aspirations of all law-abiding citizens as they cope with challenging times. I am grateful to the Minister for his clarifications and extra enlightenment. There is much in this programme to welcome, but one must emphasise the priority that needs to be given to the most disadvantaged within our borders. In President Kennedy’s famous inaugural speech, he memorably said:

“If a free society cannot help the many who are poor, it cannot save the few who are rich”.

The Government have focused in particular on their proposals on immigration. There are real complexities involved in removing a small number of people who are considered very dangerous to us, but these hard cases should not detract attention from the human impacts of the immigration system. I will not forget the experience of joining the wrong queue for immigration at Heathrow, having to wait ages to be seen, and watching the distress of the families and elderly being poorly treated by overworked staff. The administrative splitting of the UK Border Agency will be welcome if it aids efficiency and speeds the processing of cases, especially as the so-called backlogs in the immigration system often represent real people who have been waiting many years for decisions, unable to work or contribute to our society. The emphasis on law enforcement raises some concerns about a presumption of guilt creeping into the system.

It may well be appropriate to take particular measures to reduce the pull factor for those contemplating coming to the UK, but the problem remains of inadequate practical support for those, including families with children, who are caught in the asylum system but cannot be returned to another country. Further, in considering whether a foreign national offender should be removed from the country, it is important that judges retain their discretion to make judgments between people’s Article 8 rights in terms of family life, and the risk of harm that the person presents. Not everyone appreciates that many organisations, including our own church, are global in reach, and it is becoming more and more difficult to invite visiting bishops and professors to make their contribution to the unity that we all seek.

In the Government’s proposals on curbing anti-social behaviour, the rationalisation of the system is broadly welcome, especially with the changes recently made in response to parliamentary scrutiny, but the nature of the new injunctions and orders carries a risk of net-widening. As many have pointed out, the measures proposed in the Bill are reactive. The Government’s strategy needs also to include preventive measures to address the root causes of anti-social behaviour and focus especially on early intervention and active support of family life. This is especially important because of the sanctions attached to breach of the injunctions and orders proposed. There is strong evidence that drawing children and young people into the youth justice system can often do them more harm than good.

On reform of the way in which offenders are rehabilitated in England and Wales, I warmly welcome the plans to extend post-sentence supervision to those serving sentences of less than 12 months. It is certainly true that the reoffending rate of more than 70% among young men in particular is shocking. However, there are organisations such as the church’s scheme in the Potteries that have succeeded, even in the most difficult cases, in bringing that figure down to 10%. I am sure that the Government will want to listen more carefully to such organisations. However, the plans to contract out most of the work currently done by probation trusts have perhaps been developed in haste; and this major change, which will affect more than 200,000 offenders each year, on the basis of a relatively untried system of contracting and with many questions unresolved about the effective management of risk in a fragmented offender management system, is itself a high-risk proposition.

The change in the regulation of gambling from a “place of supply” basis to a “point of consumption” basis, thereby drawing overseas operators into the scope of UK government regulation, is welcome and removes a manifest unfairness. The impact of the growing gambling industry on people’s lives, especially in areas of multiple deprivation, needs much more rigorous research in the face of relatively unsupported claims and counterclaims. It is disappointing that there is no reference in the gracious Speech to minimum unit pricing of alcohol. Much as I welcome a drink after a long day in the Chamber, I cannot deny the evidence. There is a widespread consensus among health professionals about the usefulness of such a measure, and the Government have previously made a commitment to introduce minimum pricing.

In summary, I recall the words of St Paul, passing on in his letter to the Galatian churches the instructions given him by James, Peter and John about building successful multinational communities. He said:

“All they asked was that we should continue to remember the poor”.

The citizens of this country rightly have an interest in maintaining an orderly and just society. Immigration, anti-social behaviour, gambling, alcohol control and all the aspects of ordering our society covered by the Government’s proposals present legitimate points of concern for us all. In addressing them, at a time of financial stringency, we must ensure that the solutions that we adopt do not tear us apart by bearing down disproportionately on those least able to make choices for themselves. We should continue to remember the poor.