“No one is an individual—that is a modern myth. Each human being is a person who is who they are because of their relationships with others. Crime is when relationships go wrong or are handled destructively. Human beings are formed through relationships” – Bishop of Derby, 8.11.13

On 8th November 2013, the Bishop of Derby, the Rt Revd Alastair Redfern, took part in the debate on the Second Reading of Lord Dholakia’s Age of Criminal Responsibility Bill, which sought to raise the age of criminal responsibility from 10 to 12. The Bishop focused his remarks on the challenges associated with treating children as entirely individual and independent units, and the associated need of providing safe and positive spaces in which children can develop socially – particularly focusing on the need for strong family units. The Bill did not progress any further than its Second Reading. 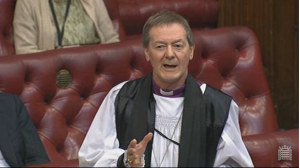 The Lord Bishop of Derby: My Lords, I, too, thank the noble Lord, Lord Dholakia, for introducing this topic and I heartily endorse all that the noble Earl has said. This is a very complex issue, and we are having this debate in a national context in which public opinion wants justice to be seen to be done. A strong scapegoating mentality exists which indicates that there is also a high level of anxiety in society. The key people to be scapegoated tend to be criminals and immigrants. We have to take that part of the context seriously in having this debate. A second context, as we have heard, is the UN recommendation on the rights of the child, that the age of criminal responsibility should be at least 12. Many countries, as we have heard, go even higher than that. A third context is that there are suggestions, as there is in Ireland, of raising the age to 12, but of allowing some flexibility in dealing with serious crimes. So this is a very complex issue in an anxious society which is nervous about seeming to give positive signals to bad behaviour and social deviancy.

We have a variety of lines of approach. The Government, as I understand it from the briefing papers, are minded to stay with 10 years because of the argument that children at that age know what is right and what is wrong. That is one way of looking at it. Opponents say that the evidence of emotional and intellectual development means that children are too immature at the age of 10, even if they know what right and wrong are. The noble Earl eloquently mentioned the growth in maturity. I suggest that one of the dangers in this whole debate is treating children as individuals—which, of course, is a modern disease. Life is much more complex than about any of us being an individual. The Centre for Social Justice begins to recognise this. One of the arguments in its book on raising the age is about the need for what it calls a “whole family approach”, seeing the child in context.

However, as we have heard, family is not a positive context for many of the children who become offenders. We have to consider the context of the child as the key criteria for making an assessment, not treating them as an individual. The noble Baroness talked in a previous debate about her grandchild. My daughter has a young child who, as Christmas comes, is more and more targeted through television adverts as an economic unit at a very young age. That is just a little example of how children are seen as individual people and economic units.

However, of course no one is an individual—that is a modern myth. Each human being is a person who is who they are because of their relationships with others. Crime is when relationships go wrong or are handled destructively. Human beings are formed through relationships. I suggest that the key in assessing children and in finding an age on which to hook criminal responsibility is not to treat them as individuals, whether they have measureable psychology and development or whether they know right or wrong. It is to look at what I call the science of social formation, which is about where they are made a person, where they negotiate that, or where they work out their frustrations at not being the person they think they would like to be. We need to consider a number of sites of social formation in a debate such as this.

The first site of social formation is the family. Tragically, as we have heard, that is a weak link for many young people. The second site is the school. Certainly in my work with schools in the city of Derby, many young people who get drawn into crime have a very uneasy relationship with school, so it ceases to be a good formational site. Schemes of rehabilitation try to create opportunities for social interaction, but they are undermined by lack of resources. As we have heard on the mentoring of young men, the voluntary sector has an important part to play. In that sector we can create sites of social formation that are more fluid and flexible than the family or the school, and which can operate in much more informal ways.

I will give a small example of this. Last night I presented awards to choristers who had achieved a certain standard of singing in church choirs, many of whom were young people and children. We all know that to sing in a choir is about learning discipline and accountability and having a sense of achieving something for others. As we know, young people get drawn in to gangs and peer groups, but that needs to be put in a broader and bigger context. The voluntary sector has a lot of resources to offer young people that broader context—often an intergenerational one—which is a site of social formation that is more mature, richer and more likely to help young people develop responsible relationships.

We should not, therefore, look at this age issue only in terms of the young person being a moral agent or in terms of their maturity. We should look at how they progress in terms of social relationships and where there is support for that, and measurement. For instance, in the church the age for confirmation is generally 11. Being the Church of England, we allow all kinds of exceptions one way or the other; some people might be in a strong Christian family at a younger age of nine or 10. However, confirmation generally takes place at age 11 and above because people are then in a secondary school environment, which is a much richer social formation environment than primary school—a much richer, more complex, more challenging one. That is where young people need to be helped to grow and to be accountable.

I make a plea that we not be intimidated by the scapegoating mentality of the wider society in which we sit, which forms a backcloth that might make the case for seeming to be tough, which will mean that children will pay the price. I am asking that we do not just objectify children as individuals, whether economic units, moral units or developmental units. Children above all human beings need to have taken seriously the fact that we grow through relationship and social formation.

The Christian gospel highlights the miracle of forgiveness, which we need to remember in this debate—the possibility to join in a different kind of set of social relationships that are more wholesome, nourishing and flexible. For children, the promise and possibility of forgiveness is very important. We have all done things when we were small that we needed the chance to recover from, and that needs to be a very important part of our calculations. If we are going to resist scapegoating and objectifying and take the social context of the formation of children seriously, and know that that, love and forgiveness and another chance are what grow people into full human beings, in the context of those things, I am minded to support the noble Lord’s suggestion to move from 10 to 12 years, and I can see lots of advances in perhaps raising the bar even higher one day.

Lord Ahmad of Wimbledon: …Let me say at the outset—and the right reverend Prelate mentioned this—the Government currently have no plans to raise the age of criminal responsibility from 10 to 12. We believe that children aged 10 and above are able to differentiate between bad behaviour and serious wrongdoing and should therefore be held accountable for their actions. When a young person has committed an offence, it is important that they understand that it is a serious matter and will be dealt with as such. The public must also have confidence in the youth justice system and know that offending will be dealt with effectively…

The right reverend Prelate the Bishop of Derby, in his most thoughtful contribution, raised the concept of the science of social formation. He talked about the importance of the three pillars of family, school and rehabilitation. As a person of faith, I associate myself with the sentiments that he expressed on the concept of forgiveness. He also referred to his family and talked of his daughter’s child being an “economic unit”, becoming a more active economic unit when Christmas comes. I say to the right reverend Prelate that I have two economic units at home, and they persist as such throughout 12 months of the year and not just at Christmas. However, that is perhaps a discussion that we can have outside this debate…

The noble Earl, Lord Listowel, and the right reverend Prelate the Bishop of Derby raised the issue of mentoring. Mentors are used frequently in our criminal justice system and there is a great emphasis in the current process of offender rehabilitation to look at mentoring across the board. It is something that works. It has been shown to produce the results that we require and, most importantly, it ensures that people become productive citizens at the end of that mentoring. It is something that we are seeking to do within the rehabilitation programme. If someone is given a custodial sentence, a needs analysis is conducted and mentoring continues not just during that sentence but, most importantly, when they come to the end of their custodial sentence…

Lord Dholakia: …It was also very nice of the right reverend Prelate the Bishop of Derby to speak in the debate. You cannot be wrong if God and the church is your side, and I welcome his contribution to the issue…