The Archbishop of York, Most Rev John Sentamu, spoke on 18th July 2014 in the Second Reading of the Assisted Dying Bill in the House of Lords.  His speech follows in full: 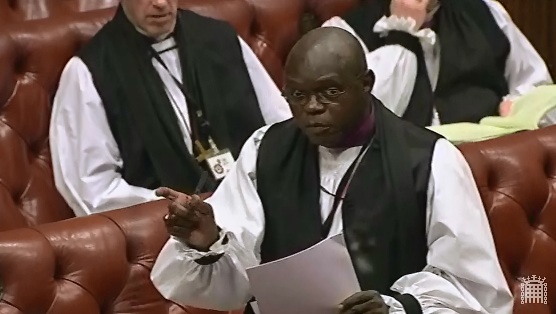 My Lords, let me state at the outset that the ‘official’ Church of England position was made very clear on 9th July 2005, when the General Synod voted on a motion referring to the joint submission of the C of E House of Bishops and the Roman Catholic Bishops’ Conference to your Lordships’ House Select Committee [1].  The motion argued strongly against making assisted suicide or euthanasia lawful. The vote was carried by 297 votes to 1.

This position was reaffirmed in a General Synod motion in 2012 [2].

My Lords, this present Bill is not about relieving pain or suffering. It makes that quite clear in its definition of a terminally ill patient to include those whose progressive illness can be relieved but not reversed.   This bill is about asserting a philosophy, which not only Christians, but also other thoughtful people of goodwill who have had experience in care for the dying must find incredible: that is, the ancient Stoic philosophy that ending one’s life in circumstances of distress is an assertion of human freedom.   That it cannot be.   Human freedom is won only by becoming reconciled with the need to die, and by affirming the human relations we have with other people.    Accepting the approach of death is not the attitude of passivity that we may think it to be.   Dying well is the positive achievement of a task that belongs with our humanity.   It is unlike all other tasks given to us in life, but it expresses the value we set on life as no other approach to death can do.

We need time, human presence and sympathy in coming to terms with a terminal prognosis.   To put the opportunity to end one’s life before a patient facing that task would be to invite him or her to act under their influence rather than dealing with them.

It is possible to think abstractly that one’s early death would be welcome to one’s nearest family and would spare them trouble. But in fact the best service one could do for them would be to accept their care, and to show appreciation of them at the end of one’s life.

When it was discovered that my mother, Ruth, had aggressive throat cancer she was expected to live only a matter of weeks, but through the skill and care of the hospital and Trinity Hospice, she was able to live for eighteen months. During this time our children, who had been born in England, were able to get to know and love their grandmother, and she was able to delight in them. This was a gift.

The Bishop of Worcester, John Inge, recently wrote about his wife Denise who died of a sarcoma on Easter Day.

‘How easy it would have been to succumb to despair when the diagnosis was given.  It looked as though she had only days – or weeks at most – to live.

As the dreadful effects of chemo took their toll and I became more and more distressed at seeing her in such pain and discomfort, how tempting it would have been for me, if assisted dying had been legal, to have suggested that it would be ‘for the best’ for her to end it all there and then.

Many argue that this would have been compassionate and caring thing to do.’

But Denise survived several more months, and during the times when I visited and prayed with her and Bishop John, I saw her emerge from the initial darkness to enjoy some precious time with friends and family.

Shortly before she died, she wrote,

“Contemplating mortality is not about being prepared to die, it is about being prepared to live. And that is what I am doing now, more freely and more fully than I have since childhood. The cancer has not made life more precious – that would make it seem like something fragile to lock away in the cupboard. No, it has made it more delicious.”

My Lords, the Assisted Dying Bill could deprive some terminally ill individuals and their families of this very important time of shared love and wonder. I urge you to resist it. This is far too complex and sensitive an issue to be rushed through Parliament and decided on the basis of competing personal stories. I therefore suggest that a Royal Commission be set up to provide a way of exploring these complex issues in greater depth.

[2] The 2012 motion “affirmed the intrinsic value of every human life and express its support for the current law on assisted suicide as a means of contributing to a just and compassionate society in which vulnerable people are protected”;

In a full count of the Synod, there voted in favour 284, against none, with four abstaining.