On 17th July 2015 the Bishop of Southwark, Rt Revd Christopher Chessun, spoke during the Second Reading debate of Lord Purvis of Tweed’s Constitutional Convention Bill. The Bishop welcomed the Bill and its efforts to include those from outside the political sphere in the decision-making process. He also said that the House of Lords needed to resolve the issue of its powers and functions before resolving questions about its membership. 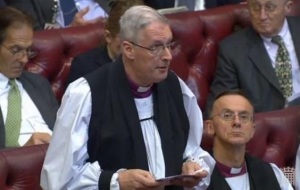 The Lord Bishop of Southwark: My Lords, I congratulate the noble Lord, Lord Purvis, on securing time for this Bill—a Bill that, in making provision for a constitutional convention, I am happy to support. I note that a growing consensus is emerging for the constitutional questions that we face to be addressed. To use the terms of the noble Lord, Lord Hennessy, when he recently addressed the House of Bishops, we are faced with a constitutional building site and no blueprint of what it is we are trying to construct. A convention could at least help provide that blueprint.

It was in 2011-12, when the right reverend Prelate the Bishop of Leicester served on the Joint Committee on House of Lords Reform, that we on these Benches first made public calls for a convention. A sizeable number of members of that committee, from across the spectrum, decided that the problem with trying to address as serious an issue as House of Lords reform was that the process was fundamentally flawed, for it sought to address issues of form rather than function. No one had adequately set out for debate the question about what the House of Lords ought to be doing. Naturally, it makes greater sense to settle the question of powers and function before getting into issues of form. That basic question is easily extrapolated into other similar constitutional questions, such as devolution.

Turning to the substance of the Bill, the proposal that 50% of the members of the convention should not be employed in political roles is much to be welcomed. It was a point that the House of Bishops made in its pastoral letter ahead of the election, when we called for the wide involvement of the whole nation and community in discussions about the constitution. To focus equally on those who are not employed in formal political roles argues for strong representation from churches and other faiths as key components of civil society. I wonder whether the Bill might be strengthened by the naming of such groups as being specifically included in a convention. The established church, which has been involved in every constitutional discussion since Magna Carta, would clearly have a locus in any discussion around the future of the constitution. I can confirm the willingness and active desire of the Church of England to be involved in such work.

While welcoming the broader thrust of the Bill, I am cautious about some of its rather ambitious proposals. To seek to make recommendations on such a broad list of issues as the Bill requires is a mammoth task. To do this within 12 calendar months might be considered to be Herculean.

However, there is perhaps a greater problem here. It is widely noted that public trust in our political system and class is at a very low ebb. Much of this is based on the perceived self-interest of political parties and a sense that short-termism that gives political advantage is often a governing factor in proposals for change and reform. If we are adequately to engage the people of this nation in a conversation about the nature of our constitution, this surely is a much bigger challenge to overcome.

In the list of things that a convention would address, this Bill rather assumes that there are things, such as the voting system, that need to be fixed. Such suppositions betray an underlying political conviction, and we ought perhaps to be wary of them. The 2011 referendum on the voting system confirmed as an important part of our democratic system that an MP represents a defined geographical area and is accountable to his or her constituents. A general election is still a collection of 650 local polls with the aggregated result determining the Government. It is not a single national poll, no matter how much our media and political system have portrayed it as such at successive general elections.

So questions about reform need to begin with function, not form, rather than assuming that the voting system needs changing. We should begin with questions about what is important in terms of representation and the nature of the key relationship between those who are represented and those who represent them. The same question about function and form can, as I have suggested, be asked about other areas of the Bill, too.

I turn finally to one thing of which there is no mention in the Bill: the lack of remit to examine the relationship between church and state, or the monarchy’s position in relation to the church. It will not surprise your Lordships to learn that I believe this to be right, and I welcome it. If there were ever an appetite to address these questions, they ought really to be looked at separately. However, I note that one of the terms of reference in the Bill is to look at what ought to be matters for future conventions. I imagine that this could be an entry point to a debate on establishment, should there be pressure so to do. I would therefore be interested in the intentions of the noble Lord, Lord Purvis, in that regard.

While it be will clear that I believe that there are issues with the Bill, its call for a convention to address the constitutional issues we face is nevertheless much to be welcomed.