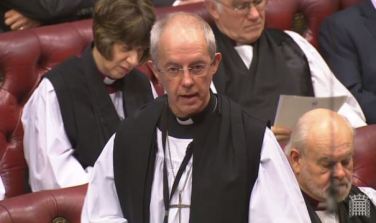 The Archbishop of Canterbury My Lords, I apologise to the House for not having been present at earlier stages of the Bill, for medical reasons beyond my control. The benefit for your Lordships is that I will not be on my feet for long.

I was disappointed to miss the excellent debates at early stages. What unites us in this House, across all Benches, is how seriously we take our role as scrutineers. On our best days, we approach each question not on the basis of tribe or loyalty, but on the strength of the argument and how it might work for the common good of the whole country. On these Benches, we are not a party, nor do we follow a Whip. Today will see a significant number of Bishops appearing, not because we hold ourselves out as constitutional experts but because we are deeply embedded in every local community in England. We may dress the same, but we have independent minds, as anyone observing church politics recently will be well aware. So I speak today not in a corporate but in a personal capacity.

The referendum campaign and its aftermath revealed deep divisions in our society, as the noble Lord, Lord Hain, rightly commented—like him, this feels like the most divided country that I have lived in in my lifetime. Whatever the outcome of the next two years, our nation’s future, particularly for the most vulnerable, will be profoundly damaged if we arrive in 2019 even more divided, without a common vision to confront the opportunities and challenges before us. To meet these opportunities and challenges in every aspect of policy and every level of society, we must find a level of national reconciliation. So how we conduct this process is as important as the outcome. It would be dangerous, unwise and wrong to reduce the substance of the terms on which we exit the European Union to the result of a binary yes/no choice taken last summer, and the Government should avoid any inclination to oversimplify the outcome of the most complex peacetime negotiations probably ever to have been undertaken.

But neither is the complexity of a further referendum a good way of dealing with the process at the end of negotiation. It will add to our divisions; it will deepen the bitterness. It is not democratic; it is unwise. Even if circumstances change, as the noble Baroness, Lady Wheatcroft, rightly said they were likely to do—even if they change drastically—a dangerous and overcomplicated process is the result of a referendum.

It is beyond doubt that those bringing this amendment and others before this House today, and last week in Committee, are moved by legitimate and deeply principled concerns for our country. To challenge that, as has been done in the press, is entirely wrong. Similarly, those who have argued against amending the Bill have done so not from a deficit of care but from a concern for process and a legitimate desire to reach the best outcome.

Division of our country is not a mere fact to be navigated around like a rock in a stream but something to be healed, to be challenged and to be changed. During many years in which I have worked in countries in the midst of deep division—sometimes armed, sometimes merely civil—I have seen two cardinal errors made in seeking to bring reconciliation and building common vision. The first is to complicate the process; the second is artificially to simplify complicated substance. On this amendment, I fear we risk making the process too complex and the substance too simple. Although I fully understand the good intentions of those who tabled the amendment, for these reasons I will be unable to support it.

Lord Foulkes of Cumnock (Lab):…I am not sure that the debate has helped me, because we have heard eloquent speeches on both sides, by my noble friend Lord Morgan and by the most reverend Primate the Archbishop of Canterbury.

Lord Robathan (Con): …Nevertheless, we had a referendum and, as the most reverend Primate said, it was a binary choice: yes or no. People knew what they were voting for, and they voted to leave the EU. It is unbecoming and, if I may say so, patronising of people to attribute to the individuals of this nation the reasons for how they voted.

Baroness Smith of Basildon (Lab)…As we have heard today, it is clear that a second referendum is being pushed by some as a way to unite a country that is seriously divided on this issue. I have looked for evidence to support that idea. Why would a second referendum be different in tone, mood or argument from the first? I take comfort from the words of the most reverend Primate the Archbishop of Canterbury in a thoughtful and wise intervention in the debate. He made it clear that whether it is a first referendum, a second referendum, or any other, it will be down to a binary choice: yes or no. That never unites; it only ever divides.

The Parliamentary Under-Secretary of State, Department for Exiting the European Union (Lord Bridges of Headley) (Con)...Let me say a word about the need to come together. The most reverend Primate the Archbishop of Canterbury made a thoughtful and powerful speech. He is right about the need to heal our divisions and to work together to tackle the challenges we face. I would like to put on the record once again my thanks to the Church of England for hosting round tables to do just that.