On the 10th July 2017, the Bishop of Chelmsford, the Rt Rev Stephen Cottrell spoke in  Baroness Vere of Norbiton’s debate: That this House takes note of the current security situation in the United Kingdom. The Bishop used his speech to argue for a view of security that focused on cultivating harmonious relationships as well as prevention. 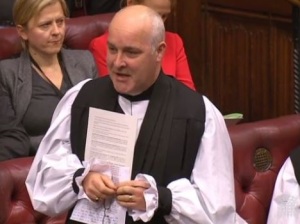 Lord Bishop of Chelmsford: My Lords, building on that, I will try to be a little hopeful. I too thank the Government for the opportunity to discuss these matters. First, we need to acknowledge that in the light of these horrors we are right to identify security as a primary aim of government. In a debate such as this, we also need to make sure that we pay proper tribute to our Armed Forces, police, prison staff and many others who daily face danger and harm—and of course, as we know, who even lay down their lives, such as PC Keith Palmer.

It is also incumbent on us to remember those who have laid down their lives in the past. This gives me a chance just to mention PC Ian Dibell, who died restraining a gunman in Clacton five years ago in the diocese where I serve—yesterday was the fifth anniversary of his death. We need to remember and to salute these individuals. But of course this debate is also about how we support and resource them so that they can do their job of maintaining our security. I certainly welcome what I have heard from the noble Baroness, Lady Vere, about the comprehensive and international approach that the Government want to take but, along with others, want to question whether the resources we are looking at will be sufficient. As we have just heard, we also need to be resolute in identifying and opposing anyone who harbours, supports or funds terrorism—anyone at all, from any direction or ideology.

Furthermore, it is rightly said that when strengthening defences against terror and murder, we must not sacrifice the freedoms which are among the values that stand so firmly at the heart of our national life. We welcome and recognise that this Government, like their predecessors, will attend closely to the right balances between privacy, safety, freedom and security that we have already heard about.

I want briefly to emphasise one further angle, which I hope is hopeful and perhaps takes a slightly longer view. The word “secure” originally means “without care”. It is a condition where one is free enough from apprehension and fear to flourish and develop as a person and as a society. The Hebrew word “Shalom” and the Arabic word “Salaam”— basically, the same word—are very close in meaning to “secure”. They point to a totality of harmonious relationships where one is safe and secure, where there can be human flourishing and where human well-being for everyone prospers.

Of course, when such security is threatened, our instinct is to build more walls and post more sentries. As I hope that I have already made clear, proper provision and support for those who keep us safe and making that a national priority is of course vital, but we must also acknowledge that beyond that, bigger walls and more heavily armed sentries cannot be the only answer.​

In Australia, cattle graze on vast farmlands without the boundary markings of a fence. “How do you gather your cattle together?”, a rancher was asked. “How do you keep them safe?”. “When you have dug a well,” he replied, “you do not need a wall”. This is another interesting approach to security. The long-term security of our nation and our world will only be achieved in the same way. As well as investing in walls, we must equally—perhaps, more so—invest in wells.

One thing that pains us most about recent incidents is that these terrorists are homegrown. It gives me no pleasure to say that in the diocese where I serve, which covers five east London boroughs and the whole of the county of Essex, in the work I do visiting communities, many young people feel disfranchised and overlooked and do not have the opportunities that we would wish them to have. I am not trying to make any particular point here, other than that I see that. These conditions are breeding grounds for disenchantment which can, under a certain toxic mix of circumstances, turn to radicalisation of various sorts.

We need to provide the wells: the opportunities, the hope, the unifying values that can refresh and envision. It is good to hear about the initiatives that the Government and previous Governments have made. I thank them for them—indeed, I have been involved in some of them locally—but we must continue to address them. For instance, there is Near Neighbours in east London and the work of local schools, parish churches and other faith and community groups. On the ground, these are places that are investing in our neighbourhoods and providing hope. In the end, it is these things that will be our very best defence against the entrapment and radicalisation that leads to terror and dis-ease.

I hope that government policy will continue to keep its eye on the well as well as the wall and that your Lordships will forgive me, as one who is a follower of someone who broke down barriers and burst out of tombs, and consider this a reasonable contribution to this debate.

Lord King of Bridgwater (Con): As I am following the right reverend Prelate, I shall say one or two words about the relationship that the Church of England and the other churches can play because at the heart of this is the terrifying abuse of religion, if one looks at it in that way, in which we have a sect that now seems to believe that 98% of the world’s population are legitimate targets in pursuit of its particular objectives, which is an amazing situation.

Baroness Jones of Moulsecoomb (GP): Finally, to echo the noble Lord, Lord Harris, and the right reverend Prelate the Bishop of Chelmsford, how far are we prepared to go in reducing our own freedoms as a response to people who are trying to take them away? It seems to be the exact opposite of what we should be doing—we should be celebrating our freedom and allowing more of it rather than closing it down.

Lord Judd (Lab): Of course I am a realist and realise that some of that justice cannot be transparent in a fight against terrorism, but we have to make sure that “because it cannot always be” does not become a convenient way of beginning to say more and more that the justice system is not going to be transparent. It needs to be transparent, and people need to have confidence in the system of justice. All these things matter tremendously, and I thought the right reverend Prelate the Bishop of Chelmsford made a very wise and thoughtful intervention about how we will win the battles in the fight against terrorism.

The Minister of State, Home Office (Baroness Williams of Trafford) (Con): The right reverend Prelate the Bishop of Chelmsford talked about the unifying values the Government have envisaged. Some of the programmes we have had in recent months and years have homed in on those unifying values. He mentioned the Near Neighbours projects which have been so good in promoting the unifying values of cohesive communities in our society.