On 14th September 2017 the House of Lords debated a motion from Lord Chadlington, ‘That this House takes note of the effect of gambling advertisements on children.’ The Bishop of St Albans, Rt Revd Alan Smith, spoke in the debate: 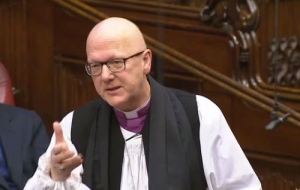 The Lord Bishop of St Albans: I too add my thanks to the noble Lord, Lord Chadlington, for introducing this important debate, which has such implications for young people in our country.

Gambling-related advertising poses a substantial risk of harm to children.

I am grateful for the work that the Advertising Standards Agency does to regulate the industry, but I do not think that we have been either bold or creative enough in our efforts to protect our children and young people. As we have already heard, exceptions to current regulations allow adverts for bingo and sports betting before the 9 pm watershed, which means that children are now being exposed to record-breaking numbers of gambling-related advertisements. Whether or not they are specifically aimed at children, they are allowed to display footballers and other personalities and stars who may themselves be children, commending and glamorising it as a lifestyle.

According to Ofcom, between 2005 and 2012, the number of gambling-related adverts on TV increased from 90,000 to 1.4 million. In 2012, the average child watching TV saw 211 gambling-related ads per year. ​The problem is particularly linked to the exception in the current advertising rules that allows sports gambling companies to place ads during pre-watershed football matches. Two-thirds of ads for sports betting are shown pre-watershed. There is substantial evidence that that affects children’s behaviours, especially that of young boys. In the Gambling Commission’s most recent study, more than one-fifth of 11 to 15 year-old boys had spent their own money on a gambling activity in the week before the survey. That compares to just 11% of girls, and mirrors the fact that more men than women in this country are classed as problem gamblers. It is considerably higher than the levels of those who report drinking, smoking or taking drugs and the addictions associated with them.

Exposing young children, especially boys, to huge amounts of advertising, particularly during football matches but also during other games, is a risk to the population’s overall well-being. Allowing some kinds of advertising pre-watershed but not others sends out mixed messages to children and confusingly suggests that some kinds of gambling may carry fewer risks than others. Psychological research tells us that children are less able to make reasonable and appropriate judgments about advertising and are particularly vulnerable to exposure. It is one thing to advertise to adults, who are more able to make fully informed decisions about risk, and another entirely to expose children to this barrage of adverts.

Children need to be educated about gambling by families, schools and other responsible sources in the community. The Gambling Commission survey suggested reasons why children go in for gambling included a desire to make money, because they thought it would be more fun or exciting.

As we all know, games of chance are no substitute for employment, and the enjoyment some people gain from gambling must be balanced with a knowledge of the substantial risk and responsibility involved for those who choose to play. Allowing children to be exposed to gambling adverts interferes with their ability to receive responsible, balanced messages about the risks of gambling.

Of course, the next frontier is gambling advertising online. More than 60% of 11 to 15 year-olds have seen gambling ads on social media, with a similar number seeing other online ads. I am anxious to hear what comments and analysis we will get from the gambling review on online advertising, and children in particular, but it is clear that betting companies are not doing enough to ensure that children do not see their ads. It is not enough that ads are not targeted at, or designed to appeal to, children. It would be better for children to not have to confront these ads at all, for their own safe development.

Both government and industry have begun to recognise the effect many forms of advertising have on young people. A recent editorial in the respected medical journal, the Lancet, called problem gambling a “public health concern”, saying that the UK has not met the,

“need to balance tax revenue with a duty of care to vulnerable members of society.”

Surely children are some of the most vulnerable and impressionable members of our society. The Government have rightly taken steps to ban cigarette companies ​from sponsoring sport, and restrict alcohol and junk food advertising targeted at children. The Football Association, recognising the problem that gambling has in the community, has ceased sponsorship deals with betting firms—including a £4 million contract with Ladbrokes—and does not allow betting firms to put sponsorship ads on children’s T-shirts. Nevertheless, further action must be taken to close loopholes and force betting firms to take more drastic action to protect children. We have already heard that recent legislation in Australia has banned gambling adverts during pre-watershed sporting events.

We all accept that betting is part of the life of our nation. Many people enjoy it and do it responsibly; nevertheless it seems to be a growing problem, which may reap a terrible harvest later on. I hope that the Government will be brave in acting to confront this problem in the upcoming review, for the sake of children and their families around our country.

Baroness Howe of Idlicote (CB):…The Gambling Commission’s November 2016 report showed that 63% of 11 to 15 year-olds have seen gambling adverts on social media, 24% more than once a week; and 57% on other websites, 19% more than once a week. Nine per cent of young people follow gambling companies on social media. Of these, as the right reverend Prelate the Bishop of St Albans has already said, one in three has spent their own money on gambling activity in the past seven days, making them twice as likely to have done so as children who do not follow any gambling companies online…

Lord Stevenson of Balmacara (Lab)…I think that the question of the watershed was first raised by the right reverend Prelate the Bishop of St Albans. It is obviously true that this is less effective in its operation simply because the way television is now consumed has changed so much, but he is right to point to mixed messages in the way advertising operates pre and post-watershed, particularly around live sport. Excepting bingo from the rule about not showing such adverts before the watershed definitely needs to be looked at again—bingo is not classified as gambling, when it clearly is—and sports betting adverts themselves need to be looked at very carefully…

Baroness Chisholm of Owlpen (Con) [Minister]…The Gambling Act 2005 allows licensed gambling to be offered and advertised. But the same Act makes it clear that this subject has essential objectives. Gambling must be kept free of crime, kept fair and open, and the vulnerable must, as mentioned by my noble friend Lord Chadlington and the noble Lord, Lord Berkeley, be protected. Protecting children from being harmed or exploited by gambling is one of the core objectives of the Act and a priority for the Government. As the right reverend Prelate mentioned, children are among the most vulnerable, and must be protected…

…The right reverend Prelate mentioned the glamorisation of gambling. The advertising codes specifically prohibit a range of approaches which might exploit the susceptibilities of young men. For example, gambling adverts must not suggest that gambling is a rite of passage or offers escape from educational concerns. It must not be linked to toughness or resilience, and it must not show people who are, or appear to be, under 25…

…Noble Lords mentioned several other points, including logos on shirts from the right reverend Prelate and the noble Lord, Lord Stevenson. The FA has withdrawn its sponsorship with Ladbrokes on the grounds that it was not appropriate to take betting sponsorship, and is removing its logo—but that will very much be looked at in the review…