On 16th October 2017 the Bishop of Leeds, Rt Revd Nick Baines, received written answers to five questions about housing, immigration, the economy and devolution in the north and Yorkshire: 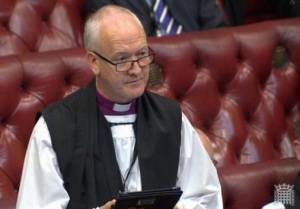 The Lord Bishop of Leeds:

(i) To ask Her Majesty’s Government what assessment they have made of the impact of large housing developments with insufficient infrastructure and amenities on community cohesion, social capital, and social inclusion.

(ii) To ask Her Majesty’s Government what estimate they have made of the level of immigration required, if any, to support the Northern Powerhouse.

(iii) To ask Her Majesty’s Government, in addition to their devolution programme for cities, what steps they are taking to promote the rural economy.

(iv)  To ask Her Majesty’s Government, in the light of the report by the Institute for Public Policy Research, Time for Change: A New Vision for the British Economy, what assessment they have made of the potential for the Northern Powerhouse to restructure the national economy.

(v) To ask Her Majesty’s Government what assessment they have made of the Yorkshire councils’ “coalition of the willing” to secure a single devolution deal for Yorkshire.

The National Planning Policy Framework recognises that the planning system can play an important role in facilitating social interaction and creating healthy, inclusive communities. It asks local planning authorities to create a shared vision with local communities of the residential environment and facilities they wish to see.

Within plan making, the social impact of proposals in the draft plan (including site allocations) are assessed through a Sustainability Appraisal which assesses the social, economic and environmental effects. The Community Infrastructure Levy can be used to address the cumulative impact of development, and Section 106 planning obligations are used to make development acceptable.

(ii) Baroness Williams of Trafford: On 27 July the Government commissioned the Migration Advisory Committee (MAC) to gather evidence on the role of migration in the economy and aligning the immigration system with a modern industrial strategy for the United Kingdom.

(iii) Lord Bourne of Aberystwyth: As Government sets out the next stages of its developing Industrial Strategy, and meeting our manifesto commitments, I hope that we will be able to provide all areas across the country with greater clarity on how best to take forward their ambitions. That’s why we want to provide a clear framework on local growth and devolution, so local areas know where they stand.

Meanwhile, rural economies are benefiting from growth and investment initiatives including fifteen Enterprise Zones located in rural areas; the Rural Development Programme for England which is providing £3.5 billion to support farmers, foresters and rural businesses and communities; and on going investment in connectivity across the UK, including the £1.7 billion of public funding dedicated to delivering superfast broadband and improvements to mobile connectivity in rural areas.

(iv) Lord Bourne of Aberystwyth: The potential of the Northern Powerhouse is huge. It is a region home to half of the UK’s largest cities, 1 million businesses, over 15 million people, and has a bigger economy than Norway, Sweden, Austria or Belgium.

Delivering on our vision for the Northern Powerhouse – defined by a vibrant and growing economy, a flourishing private sector and a highly skilled population able to make the most of the great opportunities the North has to offer – will benefit the whole of the UK.

That is why we announced £400 million for northern transport projects on 2 October 2017, building on the record investment we are already making to improve transport connections across the North – more than any Government in history. That is also why we launched the £400 million Northern Powerhouse Investment Fund earlier this year, supporting small and medium businesses across the North to start-up, grow, and expand their operations globally.

The Northern Powerhouse is a top priority for this Government and central to our plans to build an economy that works for everyone.

(v) Lord Bourne of Aberystwyth: Government has no intention to undo the legislation on the Sheffield City Region deal that has already been enacted in Parliament, including legislation for a mayoral election in May 2018. In response to 17 leaders of the “coalition of the willing”, the Government has made it clear that we would welcome any widely supported proposal for a Yorkshire devolution deal involving a single mayoral combined authority and on an appropriate geography that did not include the Sheffield City Region.