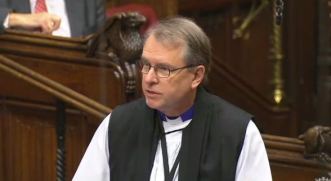 On 9th July 2018 Baroness Williams of Trafford repeated a Statement updating the House on the Amesbury incident which the Home Secretary had previously made in the Commons. The Bishop of Durham, the Rt Revd Paul Butler, responded to the Statement:

The Lord Bishop of Durham: My Lords, as it happens, over the weekend I was talking to a member of the clergy who is a resident of Salisbury. I simply asked her how it feels, and she said, “Grim and deeply disturbing”, because of the second occurrence. She said that people were just beginning to come out of this and now they do not know how to react. She was talking about community life, businesses and so on. In exploring support for businesses, does the Minister understand that this feels like a double hit for people in Salisbury, and that community encouragement and up-building is needed, not simply economic support? I ask this largely in the name of my noble friend the right reverend Prelate the Bishop of Salisbury.

Baroness Williams of Trafford: I totally understand the right reverend Prelate’s point and the point that his friend made to him. It is not just about the economy—it ​is the whole life of the community. I read a comment from a resident who said that the whole park has been cordoned off, and it had been the centre of community life. I totally take his point that it is not just a double hit: the effect has been felt more widely now. He does not need to persuade me; I understand where he is coming from. A whole-community response is needed and it must be more than just updates—there must be support for this community.