On 21st January 2019 Lord Black of Brentwood asked the Government “what assessment they have made of the performance of pupils taking the subjects that make up the English Baccalaureate.” The Bishop of Worcester, Rt Revd John Inge, asked a follow-up question: 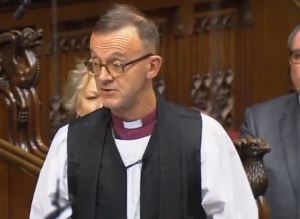 The Lord Bishop of Worcester: My Lords, one does not need to be an avid follower of the news to realise the huge impact that religion has for good and for ill geopolitically in our world. That is happening at the ​same time as we see a level of unprecedented and increasing religious illiteracy in our own society. Does the Minister regret the exclusion of RE from the baccalaureate, given the drop in numbers studying the subject at GCSE? Would its inclusion not assist in community cohesion as well as in an understanding of our world?

Lord Agnew of Oulton: I do not agree with the right reverend Prelate that we should include religious education in the EBacc. There is tremendous demand from various quarters to include a number of different subjects, but we are adamant that all schools should teach a broad and balanced curriculum. That is further emphasised by the changes to the Ofsted inspection framework that will come into force in September. It will put particular emphasis on academies, which have not had the same level of requirement placed on them previously. However, they will now be judged in inspections on the teaching of a broad and balanced curriculum, which will of course include religious studies