On 12th March 2019 the House of Lords heard the repeat of a statement from the Attorney General on Brexit negotiations. The Archbishop of York, Most Revd John Sentamu, asked a follow up question: 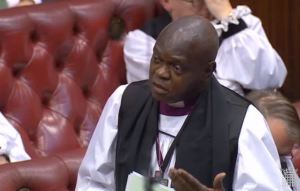 The Archbishop of York: My Lords, I have had the chance to study the Attorney-General’s comments and I agree with the noble and learned Lord, Lord Mackay, that the Attorney-General is right. There will always be a legal risk and he would be wrong not to tell us that it remains. But that is the nature of risk. I am told that in Chinese the word “risk” is made up of two pictures—opportunity and danger. We have to look at the opportunities and then the danger, but not always concentrate on the danger.

For the likes of me, the pint is always half-full. For some, it is always half-empty. I thought that the worry about the backstop was that there was no timetable in which this matter might be resolved. December 2020 has been put into the agreement. There was also a worry that the United Kingdom might not be able to unilaterally withdraw from arrangements that did not help the rest of us. That has changed and is now reflected in the protocol. I agree with the noble Lord, Lord Thomas, that it is not lawyers who will resolve this but political will, which is the way in which we should proceed.

Having read the legal opinion, I am of the view that although what has been achieved by the Prime Minister does not take away the legal risk, the issue is more about what will happen in terms of agreements. In the end, do we believe as a nation that we are capable of achieving the best agreement in our interests and those of Europe? We have been good at negotiating protocols that have helped democratic institutions all over the world. This is a time to start believing that we should create a good agreement by 2020 and show good faith. If others do not do so, then the arbitration would come into being.

I want us to take the Chinese view; there is always danger in risk but this is the time for me to say to everybody: let us seize the opportunity and be reconciled on an issue that looks difficult. A time may come, friends, when although lawyers talk and talk—I am one of them—this issue should not be resolved by them but by politicians.

Lord Keen of Elie: I am obliged to the most reverend Primate the Archbishop of York. I agree with his observation that ultimately we are concerned with a political, not legal, decision. We have to remind ourselves that the withdrawal agreement is the means to an end, not the end in itself. Either we leave on 29 March ​without any deal in place, because the law has already determined that that is our exit date, or we can leave sensibly, with a withdrawal agreement that takes us into the realms of further negotiation for our future relationship. There is no reason to suppose that as a consequence of that further move we are ever going to find ourselves in the backstop, let alone considering how to come out of it.