On 25th March 2019 the Bishop of Newcastle, Rt Revd Christine Hardman, asked a question she had tabled, on child and adolescent mental health services:

The Lord Bishop of Newcastle: To ask Her Majesty’s Government what action they are taking to improve children’s and young people’s access to mental health care. 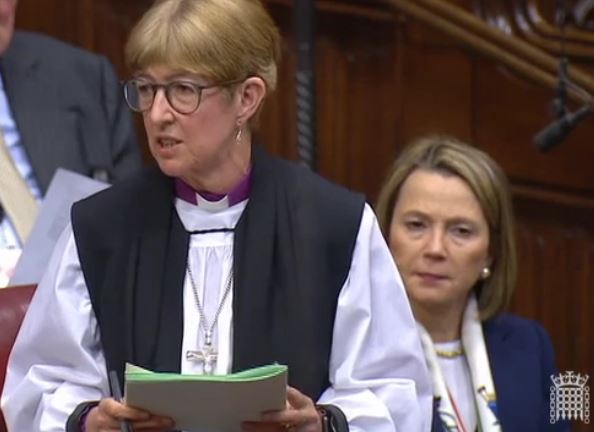 The Lord Bishop of Newcastle: My Lords, I thank the Minister for her remarks and welcome the commitment to prioritising investment in mental health care for children and young people. However, data published by the NHS in November showed that only one in four young people with a mental health disorder accessed specialist mental health services in the previous year. I welcome plans from the Government to increase this figure to 100% within the decade, but given that three-quarters of children with a diagnosable mental health condition do not currently get access to the support they need, how will the Government act to help this generation of children who will have moved on to adult services before this rollout is complete?

Baroness Blackwood of North Oxford: I thank the right reverend Prelate for her very important question. We are coming from a low base in children’s and young people’s mental health services, and successive Governments have failed to prioritise these services as they should have.

That is exactly why the long-term plan sets out our determination to address this—to ensure that all children get the care they need. With more money, more staff and more beds, there will be £2.3 billion a year more for this area by 2023-24, a figure that is growing faster than the rest of the NHS budget. It is why the NHS and HEE are targeting to recruit 8,000 more children’s and young people’s mental health staff, and why we are bringing in the first ever access and waiting services. I accept, however, that the pace at which this is going is frustrating, but it is important to understand the base from which we are coming.

Lord Hunt of Kings Heath (Lab): My Lords, on pace, will the Minister acknowledge that this Government and their predecessor, the coalition Government, have made any number of promises about investment in and prioritisation of mental health services, particularly for children and young adults, but that when it comes to the decisions made by clinical commissioning groups, the reality is that they have not brought them to fruition? What guarantees do we have that this time clinical commissioning groups will do what they have been asked?

Baroness Blackwood of North Oxford: The noble Lord, Lord Hunt, is very experienced in this area and has been involved with local clinical commissioning groups. The NHS has already opened 117 additional new mental health beds, and we have introduced new waiting standards for psychosis and eating disorders among children. Progress is already being made, but we should not dismiss the frustrations of those trying to access services. That is why we have put in place ambitious new targets with the long-term plan: we want to see 100% of children able to access the care they need.

Baroness Hollins (CB): My Lords, about two-thirds of children with autism and two-fifths of children with special educational needs experience mental health problems. But the provision of specialist clinical community child learning disabilities services is sparse. What are Her Majesty’s Government doing to ensure that the needs of those vulnerable young people are planned for in the new funding allocation?

Baroness Blackwood of North Oxford: The noble Baroness is right: those with particular needs, where autism or learning disabilities cross over into mental illness, must be taken into account. Some distressing figures show that those with learning disabilities do not get the physical health assessments that they need either. This must be taken into account and is in part why the children and young people’s Green Paper puts in place designated senior leads for mental health in schools and mental health support teams in and around schools, so that those needs can be identified as early as possible, and we can prioritise prevention and early identification of mental health needs when they arise.

Baroness Redfern (Con): My Lords, the first mental health support teams will be set up in 25 trailblazer areas, of which 12 will also trial a four-week waiting time. Will those teams be in partnership with local authorities and the relevant CCGs, and who will monitor and evaluate the outcomes?

Baroness Blackwood of North Oxford: The outcomes will be monitored by NHS England, but also by the CCGs. Of course, they will be taken into account by local authorities as well.

Baroness Tyler of Enfield (LD): My Lords, given the fragmentation and lack of co-ordination on the ground between local mental health services, what assessment have the Government made of the potential benefits of establishing local offers for mental health, mirroring the approach to local offers for special educational needs introduced by the Children and Families Act, to improve access?

Baroness Blackwood of North Oxford: The noble Baroness is very expert in this area, and I thank her for that interesting proposal. I should like to take it back to the teams in the department and write to her on that point, if that would be okay.

Lord Touhig (Lab): My Lords, I have been told that the Government expect every health body to provide a seven-day specialist multidisciplinary service to prevent people with autism needing in-patient care. That has been government policy since 2015. In the last four years, there has been a 24% increase in autistic people without a learning disability being placed in mental health hospitals. What are the Government doing about this policy failure?

Baroness Blackwood of North Oxford: The noble Lord raises an extremely important and difficult area of service. This is exactly why the Government have just launched a review of autism services, which is currently open for consultation. We are trying to improve these services as we speak.

The Earl of Listowel (CB): My Lords, as a trustee of a mental health service for adolescents—the Brent Centre for Young People—I welcome the additional funding the Government are bringing forward. Is the Minister aware, however, that one of the most effective ways of preventing children having to access mental health care is supporting, for instance, groups of adoptive parents, foster carers or head teachers, with a senior clinician? However, there is concern that many senior experienced clinicians have been lost because of the shortage of funding. Will the Minister look at what she can do to stem that loss, find out what the issue is, and do what she can to invest in that area as well?

Baroness Blackwood of North Oxford: I thank the noble Earl for his question. Obviously, recruitment aims in the mental health service are essential, and the workforce plan sets out an aim for 600 full-time posts in mental health. We have already discussed the Government’s plan in the Green Paper to set up 8,000 new children’s and young people’s posts in mental health. But that is no good if we are not also retaining those staff. NHS Improvement and NHS Employers are now working to ensure that all mental health trusts are given the tools to drive improvements in retention. This is a programme that has seen improved turnover, and we shall keep monitoring it to ensure that we retain the staff we work so hard to recruit.