On 24th April 2019 the Bishop of Durham, Rt Revd Paul Butler, asked a question he had tabled on the impact of the two-child limit for Universal Credit and Child Tax Credit payments. The exchanges, and the follow-up questions from other Members, are below: 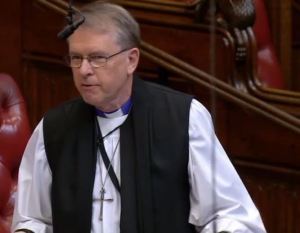 The Lord Bishop of Durham: To ask Her Majesty’s Government what analysis they have made of the impact of the two-child limit on the per-child element of Universal Credit and Child Tax Credit payments on (1) child poverty, and (2) child development, for children under five years old affected by the policy.

The Parliamentary Under-Secretary of State, Department for Work and Pensions (Baroness Buscombe) (Con): My Lords, the Government are committed to supporting child well-being, and keep the impact of all their policies under review. This policy ensures fairness between those supporting themselves solely through work and those receiving benefits. Isolating the effect of the many individual policies on the income and well-being of children and families is, of course, challenging. Child benefit continues to be paid for all children, as well as an additional amount for any disabled children.

The Lord Bishop of Durham: I thank the Minister for her reply. May I push her further on the impact, specifically on child development? We all know that the first years of life are the most crucial for development and, therefore, the impact on life chances. Will the Minister commit to hearing the emerging stories of families with a third child who are being adversely affected by this policy?

Baroness Buscombe: My Lords, to be clear, on 28 June last year we published the first annual statistics related to the policy and have committed to do so annually. The Government have a broad range of policies which affect children and families across the tax and benefits system and public services. What makes a difference to child poverty is a strong economy, and I am pleased to inform the House that employment is at a record high, at 76.1%, while unemployment, at 3.9%, has not been lower since the 1970s.

Baroness Lister of Burtersett (Lab): My Lords, the Government’s own statistics show that families with three or more children are at much greater risk of persistent poverty. Given that it is clear from Written ​Answers to the right reverend Prelate that the Government have done nothing to monitor the impact of this policy on children’s well-being, how can the Government be sure that it is in the best interests of children, in line with the UN Convention on the Rights of the Child, which the Government claim guides their policies?

Baroness Buscombe: My Lords, as I have made clear, the Government will be publishing statistics on this policy annually. Children growing up in workless families are almost twice as likely as children in working families to fail at all stages of their education, so our welfare reforms are designed to help people get into work, such that there are now 665,000 fewer children in workless households compared with 2010. Of course we want child poverty to fall, and that is part of our in-depth policy development, which is ongoing.

Baroness Boycott (CB): My Lords, I thank the right reverend Prelate for raising the important issue of child poverty and development in relation to universal credit. We are the fifth-richest economy, but 4.1 million of our children live in poverty and 2.5 million of them come from families who cannot afford to feed them properly. This cripples their ability to grow and develop. Tomorrow the Children’s Future Food Inquiry, which is the first comprehensive investigation of children’s food insecurity, will be published. It details the devastating impact that has on children’s emotional well-being, their attainment at school and their mental and physical health. What plans do the Government have to strengthen and expand policies which make healthy, nutritious food available to all families on any income, regardless of where they live?

Baroness Buscombe: My Lords, the noble Baroness’s question is across government, but it is important from our standpoint at the Department for Work and Pensions that we concentrate on lifting people out of poverty so that they can support their children and develop as role models. A child living in a household where every adult is working is about five times less likely to be in relative poverty than one in a household where nobody works, so we support parents into work. For example, the Government spend £6 billion on childcare each year, which is not reflected in our poverty statistics, to help parents go out to work, support their families and develop a responsible living situation where they can properly feed their children.

Lord Farmer (Con): My Lords, financial stability is important for healthy child development, but so too is relationship stability. The Government have replaced the family stability indicator with parental conflict measures, yet many divorces and separations take place in low-conflict relationships. Research shows that these are more damaging to children than when high-conflict relationships end. What are the Government doing to prevent family breakdown, not just reduce parental conflict?

Baroness Buscombe: My noble friend makes a good point. Although our welfare reforms—and, in particular, universal credit—are already transforming lives to lift children out of poverty and support parents into work, child development and family stability depend on so much more than financial stability and benefit ​payments alone. That is why the Government are, for example, helping local authorities across England train front-line practitioners to identify relationship distress, provide appropriate support and refer as appropriate.

Baroness Massey of Darwen (Lab): My Lords, as the Minister said, co-ordination across government is important. The Royal College of Paediatrics and Child Health suggested that having a strategy for children and young people’s health across the board would help improve effectiveness and co-ordination. Do the Government agree and what will they do about it?

Baroness Buscombe: There is no doubt that a cross-governmental strategy is incredibly important, and that is why we are working across government with our colleagues in the Department of Health and the Department for Education. We of course want to see child poverty fall and child development improve, and we remain determined to tackle this. We will look at what more can be done to help the most vulnerable and improve their life chances by tackling the root causes of poverty, ensuring that children have the best possible start in life.

Baroness Janke (LD): My Lords, nearly half of children from lone-parent families are in poverty, due not to worklessness but to disproportionately high housing costs and low wages. What are the Government doing to ensure that these children, already suffering disadvantage, are not doubly disadvantaged by the continuation of the benefits freeze?

Baroness Buscombe: My Lords, a very important point in relation to universal credit is that when somebody is homeless, the first thing our work coaches do—through support, understanding and signposting as necessary—is ensure that that person and their children are properly housed. We then go to the next stage, to see how we can support them to ensure they can manage both in work and in looking after their children.

Baroness Buscombe: My Lords, I do not accept that disabled children in such families are penalised by universal credit. We spend more than £50 billion a year on benefits to support those with disabilities, including children. Let me be clear: we are making sure we do all that we can to support people, particularly children, through the introduction of the severe disability premium.