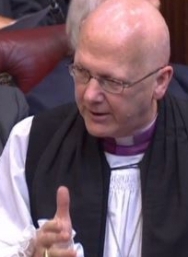 On 7th January 2020 the Bishop of St Albans, Rt Revd Alan Smith, spoke during the second day of debate on the Queen’s Speech, on the topic of the integrated security, defence and foreign policy review:

The Lord Bishop of St Albans: My Lords, I want to make a few comments on the integrated security, defence and foreign policy review, which is a welcome development in the Government’s plans for the next five years.

I note that the Government will consider the,

“freedom of speech, human rights and the rule of law”

of foreign nations and how this interacts with our own interests. I hope that the Minister will agree with these Benches that any such review should also include religious persecution, drawing on the work and recent report of the Foreign Office, assisted by the Bishop of Truro, on the persecution of Christians.

Of course, this is not just about Christians being persecuted. Many Members of this House share my concern at the persecution by the Myanmar Government of Rohingya Muslims and the increasingly desperate situation facing Uighurs in Xinjiang province. The use of alleged detainment camps, the attempts by the People’s Republic of China to distract attention from the destruction of historic places of worship, and the suppression of Uighur culture is shocking.

I hope that any strategic review will be able to explain to this House and indeed the wider world, which looks to our democracy as a beacon of hope, how issues of religious persecution will be treated by any future UK Government. The nation’s withdrawal from the EU must not be a cause of pursuing “strategic interests” and commerce at the expense of challenging nations concerning issues of persecution. Can the Minister confirm that this will be considered and emphasised in the review?​

Many in this House have shared my concerns about the Ebola crisis in the DRC. I have been pleased to meet with Ministers to discuss the matter and I was heartened by the comment of the Minister about Her Majesty’s commitment to tackling this dreadful epidemic. The situation is complicated due to the brutal massacres carried out by ADF and the subsequent breakdown of trust between local communities and the UN, leading to the latter’s withdrawal from some Ebola treatment centres. My most reverend friend the Archbishop of Canterbury—who was here earlier but sadly could not be here for the whole debate and was unable to speak—has had calls with the UN Secretary-General and the Vatican to explore ways to rebuild community relationships.

The UK Government’s support is needed to help MONUSCO’s reform, ensuring that it works more effectively with communities and the Congolese army, and to prepare for a post-Ebola period. As churches are often the only organisations left on the ground in these war zones, we are uniquely placed to deliver assistance, with the aid of the UK Government, and to use our networks to provide health education programmes. These are being rolled out at present through the churches in areas where some of the aid agencies are no longer able to operate.

I turn to the peace process in South Sudan. It has been encouraging to see some signs of progress in the last month, but sustained pressure from the UK Government is required to ensure that the transition maintains the ceasefire and benefits all the people. Pressure on the deadline alone without tackling outstanding divisive issues—particularly the number of states and boundaries, and unified security—risks a return to conflict and oppressive rule by the incumbent Government. Recently the most reverend Primate the Archbishop of Canterbury, along with the Pope and the former Moderator of the Church of Scotland, sent an unprecedented joint letter to the political leaders, four of whom participated in the Vatican retreat in April 2019, encouraging a

“renewed commitment to the path of reconciliation and fraternity”.

It is important that political pressure is added to this initiative. Can the Minister assure us that this will be followed up and that peacebuilding in the region will be part of this urgently needed review, to which we look forward in the coming months?