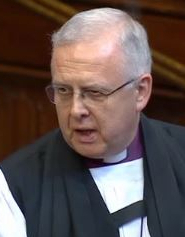 On 25th February 2020 Baroness Crawley asked the Government, “further to the announcement by the then Prime Minister on 8 November 2014, what plans they have to reinstate the war widows’ pension for those widows who were required to surrender that pension due to marriage or cohabitation.” The Bishop of Peterborough, Rt Revd Donald Allister, asked a follow up question:

The Lord Bishop of Peterborough: My Lords, does the noble Baroness agree that the scandal of this situation is that it applies only in cases where the incident that caused death occurred between April 1973 and April 2005? Those widowed because of an incident before 1973 or after 2005 do not lose their benefit if they remarry. That is complete nonsense and shameful. Should it not be put right? Furthermore, the noble Baroness has described this payment as a benefit. Can we not describe it instead as compensation? Should not war widows’ pensions be called war widows’ compensation so that widows are not subject to this sort of withdrawal?

Baroness Goldie: The right reverend Prelate’s latter point is an interesting one. I understand that technically, the payment is a pension. As I said earlier, the difficulty confronting my department is not imaginary; it has confronted many Governments and has reached across all government departments. To be fair, the difficulty at the time of the change, which was welcomed in 2015, was reflected by the War Widows’ Association. At the time, it said that it understood the principle that legislation cannot have a retrospective effect. It realised that that was not unique to the association and its campaign, and that trying to change it would have been very difficult. I detect the strength of sentiment in the Chamber and reassure your Lordships that I undertake to relay that to the department.