On Thursday 17th September 2020 Baroness D’Souza asked the Government “what assessment they have made of reports of the presence of the Chinese Air Force in Taiwan’s airspace; and what steps they are taking to support the independence of that country.” The Bishop of Southwark, Rt Revd Christopher Chessun, asked a follow-up question: 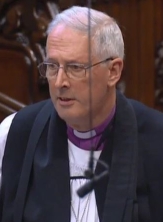 The Lord Bishop of Southwark:  My Lords, this country has recognised the Government in Beijing as the legitimate authority in China since January 1950, with a very distinctive status, as the Minister has acknowledged, for Taiwan, which should be discussed peacefully between the authorities in Taipei and those on the mainland. I am glad to hear about the Minister’s lobbying in connection with the World Health Organization. Would he care to comment on this pattern of marked aggression by the current Chinese Government, which has sought to limit options for people at home and abroad and is so damaging?

Lord Ahmad of Wimbledon (Con): My Lords, the right reverend Prelate is right to raise the importance of a peaceful discussion on the issue of Taiwan between people on both sides of the Taiwan Strait. I agree with him. Increasingly we have seen human rights issues where China is concerned, and I have spoken on that from the Dispatch Box. Our relationship with China is a strategic one, but that does not prevent us from calling out human rights abuses when they occur.