The Bishop of Leicester spoke in the debate on the Report Stage of the Children & Families Bill. He spoke in favour of Amendment 53, on behalf of the Bishop of Oxford, who co-sponsored the amendment. The amendment called for guidance on sex and relationship education to be updated in light of technological changes. He spoke of the need for holistic education of children, and reflected on the conclusions of the ‘Good Childhood’ commission that children themselves are keen to develop strong and healthy relationships. The amendment was not pressed to a vot 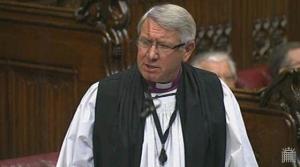 The Lord Bishop of Leicester: My Lords, I support Amendment 53 and speak in place of the right reverend Prelate the Bishop of Oxford, who has lent his name to it but cannot be in his place today. Personally, I find myself on the side of those who want PSHE to be a formal part of the curriculum and Amendment 53 goes some way in that direction.

I have three brief points to make. First, we on these Benches see social, emotional and spiritual intelligence as a vital part of a child’s development. We are not just interested in raising children who can pass exams, but in creating opportunities for young people to take control of their lives and values. Secondly, it is clear that there is a strong and growing coalition of organisations involved in this work, which have some knowledge in this area, and which support this proposal, including the Children’s Society the Mothers Union and many others.

Thirdly, I speak as a former chair of the Children’s Society and as a member of the Good Childhood commission, which reported four years or so ago, and which took evidence from more than 5,000 children. It was not evidence on this specific point, but it was evidence on the general point of what children understand makes for their well-being. Over and over again, children said that one of their top priorities was their friendships. They were trying to find their way through a complex, labyrinthine world in which friendships, intimacy and relationships had to be understood in this technological age, which has been so vividly described by previous speakers, where it was children who were asking for help in this area.

That is the most telling contribution I want to make to this debate. We do not have children in this House; we do not have the voice of children here. If we listen carefully to what they are saying to us through the Good Childhood Report and in other ways, we will find that they want our generation to help them to understand who they are and who they are with others in this completely new world, which has not shaped the relationships or outlooks of any Members of your Lordships’ House. For that reason, I strongly support Amendment 53.